A deal aimed at reducing violence in Syria is again in the news, as regional powers meet in Kazakhstan for a a fifth found of talks aimed at ending a bloody war now in its seventh year.

The agreement – signed in May by government backers Iran and Russia, and rebel ally Turkey in the Kazakh capital, Astana – is the latest in a series of ceasefire proposals aimed at ending Syria’s war.

The plan calls for the cessation of hostilities between rebel groups and forces fighting on behalf of Bashar al-Assad‘s government in four so-called de-escalation zones in mainly opposition-held areas of the country, with Russia, Turkey and Iran to act as guarantors.

Zone 1: Idlib province, as well as northeastern areas of Latakia province, western areas of Aleppo province and northern areas of Hama province. There are more than one million civilians in this zone and its rebel factions are dominated by an al-Qaeda-linked alliance.

Zone 2: The Rastan and Talbiseh enclave in northern Homs province. There are approximately 180,000 civilians in this zone and its network of rebel groups includes al-Qaeda-linked fighters.

Zone 3: Eastern Ghouta in the northern Damascus countryside. Controlled by Jaish al-Islam, a powerful rebel faction that was participating in the Astana talks, it is home to about 690,000 civilians. This zone does not include the adjacent, government-besieged area of Qaboun.

Zone 4: The rebel-controlled south along the border with Jordan that includes parts of Deraa and Quneitra provinces. Up to 800,000 civilians live there.

The deal laid out the areas where rebels and government forces should halt hostilities, including air strikes, for six months. More than 2.5 million people are believed to live in the zones.

Russia will continue to fly over the areas but refrain from conducting air raids. The Syrian government is to allow “unhindered” humanitarian aid into rebel-held areas, and public services such as electricity and water are to be restored where they have been cut off.

Violence markedly decreased across all four areas in the first weeks after the deal was announced, although it eventually ramped up in Daraa.

But the sides failed to meet a June 4 deadline to determine the exact boundaries of the zones and it remains unclear how and by whom they will be policed. 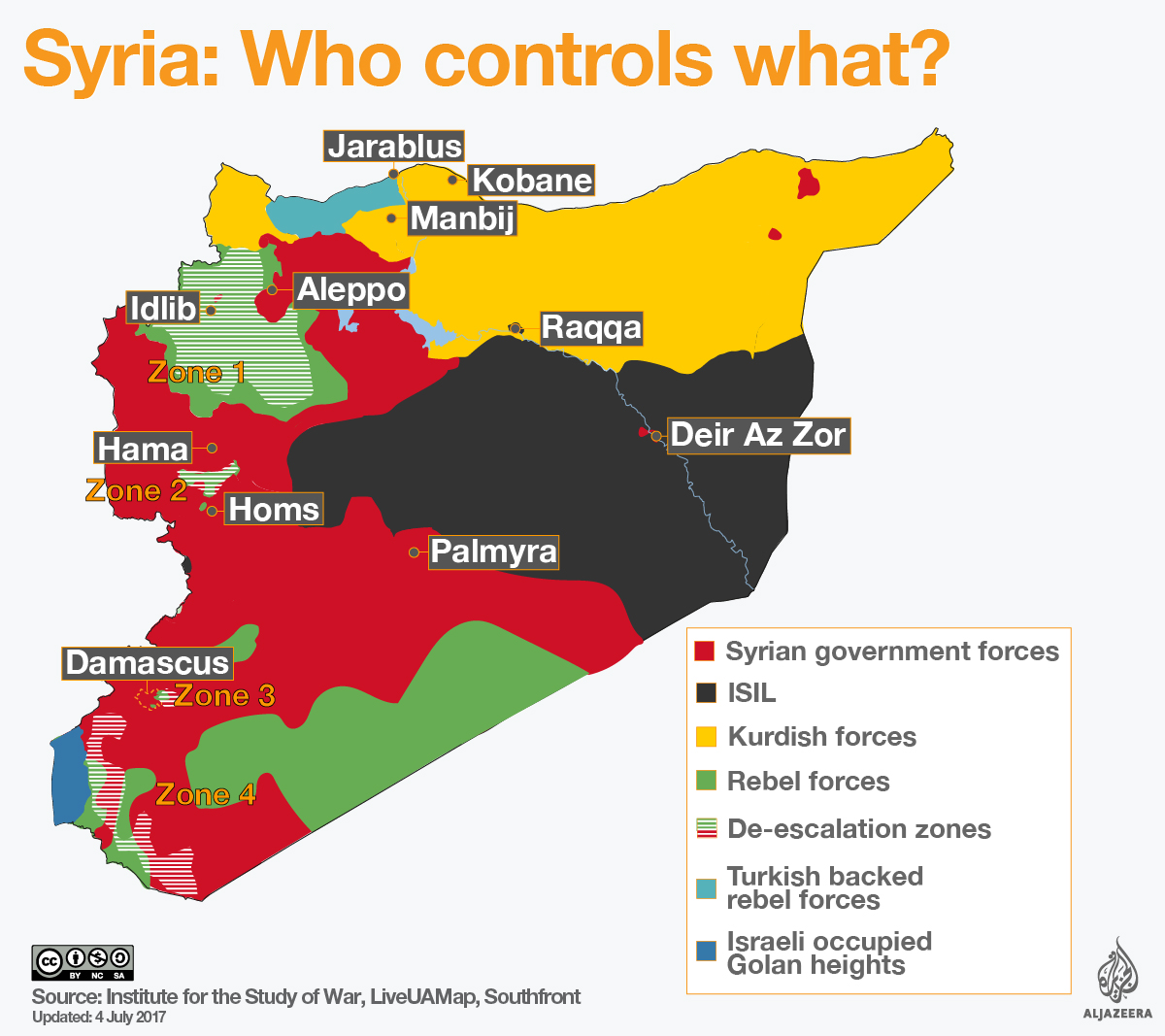 The Astana talks received a boost on Monday after the Syrian army unilaterally announced a halt to fighting until midnight on July 6 in the southern provinces of Daraa, Quneitra and Sweida, which cover the rough area of one of the four proposed zones.

Of all the four zones, the southern zone has seen the worst fighting in recent weeks.

While Damascus has spoken in support of the zones deal, the rebels have been far more pessimistic and slammed any Iranian involvement in the plan.

Osama Abo Zayd, a spokesman for the Syrian military factions at the Kazakhstan talks, said it was “incomprehensible” for Iran to act as a guarantor of the deal.

Russia has argued that the agreement will help focus attacks against “extremist” groups such as Jabhat Fateh al-Sham, a group with former ties to al-Qaeda that forms the backbone of the Hayat Tahrir al-Sham alliance, and the Islamic State of Iraq and the Levant (ISIL), which are not parties to the troubled government-rebel truce.

“This leaves Tahrir al-Sham with every reason to rally opposition to the Astana deal and to torpedo it through bombings and other provocations,” Syria analyst Aron Lund wrote in an article in May. “It also seems likely to provoke clashes between the jihadis and those rebels who intend to abide by the Astana plan, which could, in turn, tempt the al-Assad government to seize new opportunities for advancement.”

Syria’s conflict evolved from a bloody crackdown on protests in 2011 to a devastating war that has drawn in world powers, including Russia and a US-led international coalition.

The talks in Astana complement broader political negotiations the United Nations is backing in Geneva that are due to restart in mid-July.

Alexander Fomin, Russia’s deputy defence minister, said the deal would allow for the separation of the opposition from ISIL fighters and those affiliated with al-Qaeda. He did not elaborate.

The Syrian government has said that although it will abide by the agreement, it will continue fighting “terrorism” wherever it exists – parlance for most armed rebel groups fighting government troops.

The Pentagon said the de-escalation agreement would not affect the US-led air campaign against ISIL.

“The coalition will continue to target ISIS wherever they operate to ensure they have no sanctuary,” said Pentagon spokesman Marine Major Adrian JT Rankine-Galloway.

As in previous deals struck by foreign backers of the warring sides in Syria, there is no clear mechanism to resolve conflicts and violations.

This is the first plan, however, to envisage armed foreign monitors on the ground in Syria.

Troops from the three countries are expected to help to secure the safe zones. But an official with Russia’s military general staff said other countries may eventually have a role in enforcing the de-escalation areas.

Sergei Rudskoi, a Russian colonel-general, said that the “work of checkpoints and observation posts, as well as the management of security zones, will be carried out by the personnel and formations of Russia, Turkey and Iran”.

Turkey, whose agenda in Syria has significantly narrowed over the past year, is a major rebel backer and its forces occupy a sizeable swath of territory in the country’s north.

Russia and Iran are key Assad allies and both are viewed as foreign occupying forces by his opponents. Iran’s presence as a guarantor to the deal has proven particularly problematic for the opposition.