US President Donald Trump has spoken separately to leaders of Qatar, Saudi Arabia and Abu Dhabi to discuss his “concerns about the ongoing dispute” in the Gulf.

In a phone conversation late on Sunday night, Qatar’s Emir Sheikh Tamim bin Hamad Al Thani and Trump spoke about the latest developments in the GCC crisis and the implications in the region, according to Qatar News Agency (QNA).

The call reviewed the position of the US, as well as international stances regarding the crisis, QNA said.

The White House said that Trump called the leaders to reiterate the “importance of stopping terrorist financing and discrediting extremist ideology”.

He also “underscored that unity in the region is critical to accomplishing the Riyadh summit’s goals of defeating terrorism and promoting regional stability”.

Spoke yesterday with the King of Saudi Arabia about peace in the Middle-East. Interesting things are happening!

Saudi Arabia, the UAE, Bahrain and Egypt severed diplomatic ties with Qatar and imposed sanctions on it on June 5, accusing it of supporting “terrorism”. The allegation has been rejected by Doha as “baseless”.

After more than two weeks, the four countries gave Doha 10 days, or until Sunday night, to comply with a 13-point demand list in exchange for the end of the anti-Qatar measures.

The demands included that Qatar shut down the Al Jazeera Media Network, close a Turkish military base and scale down ties with Iran.

Late on Sunday, the Saudi-led bloc said it would meet on Wednesday to discuss their next steps.

Kuwait had received a response by Qatar to the 13 demands, Kuwait’s state news agency KUNA said on Monday, without stating whether Qatar had rejected the list as was widely expected.

Kuwait is mediating in the crisis.

There was no other information about Qatar’s official response, but the Qatari foreign minister has already said that Doha would not meet the demands, saying the list “was meant to be rejected”.

Last month, Trump offered to mediate if the countries involved sought his help.

Over the four weeks, the US president has taken a tougher stance against Qatar, while the state department and the Pentagon had previously sought to remain neutral in the Gulf crisis. 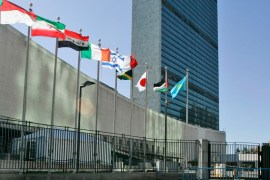 Foreign minister asks non-permanent members of UN Security Council to call for an end of the blockade on Qatar. 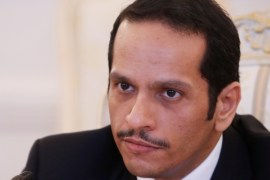