Syrian government troops have entered the last ISIL stronghold in Homs province on Friday after fighters began withdrawing, according to a monitor.

Al-Sukhna, about 70km northeast of the ancient city of Palmyra, is the last town on the road to the eastern city of Deir Az Zor, where a government garrison has held out under siege by the Islamic State of Iraq and the Levant (ISIL, known as ISIS), since early 2015.

It said government troops were firing artillery and rockets at ISIL positions.

“The ISIL organisation has carried out successive withdrawals from the town.”

The government forces of President Bashar al-Assad “have line-of-fire effective control of the town after the withdrawals”, said Rami Abdel Rahman, SOHR’s director.

He said the streets were reportedly empty, but it was unclear if pockets of ISIL fighters remained.

Since May, Assad’s army has been conducting a broad military campaign with Russian support to recapture the vast desert that separates the capital Damascus from Deir Az Zor and other towns along the Euphrates Valley.

Elsewhere in Syria, an assault on ISIL’s stronghold of Raqqa by the Syrian Democratic Forces (SDF), a Kurdish-led fighting coalition backed by US-led coalition air raids, began on June 6.

Since then, the SDF has made steady advances from the eastern and western sides of the city, reaching the walled old quarter.

Already defeated in its Iraqi bastion of Mosul, ISIL is facing multiple assaults in Syria.

Colonel Ryan Dillon, spokesperson for the US-led coalition fighting ISIL, said 45 percent of Raqqa was under the control of the SDF.

On Thursday, Ursula Mueller, a senior UN humanitarian official, told the Security Council by video from Jordan that an estimated 20,000 to 50,000 people remained in Raqqa.

She said the city was encircled and “there is no way for them to get out”.

Since April 1, over 200,000 people have fled their homes in the area around Raqqa, she said. The figure includes more than 30,000 displaced just this month as US-backed Syrian fighters try to overthrow the fighters. 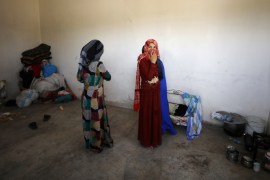 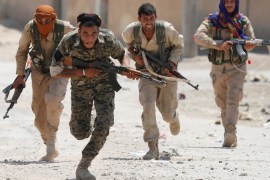