The founder and leader of a Democratic Republic of Congo rebel group who is wanted for crimes against humanity has surrendered, the UN mission in Congo has said.

Ntabo Ntaberi Sheka, the founder of Nduma Defense of Congo, has been wanted since 2011 on a national warrant for crimes against humanity, including for mass rapes.

He surrendered to UN forces in the country’s North Kivu region on Wednesday.

Sheka handed himself in “in full awareness of the fact that he is wanted by the government … to stand trial for alleged crimes”, the mission said.

It was not immediately clear why he had turned himself in, but his forces have been locked in a losing fight in recent years with a rival armed group, Reuters news agency said.

The UN mission said it would support Congo authorities in pursuing criminal prosecutions for human rights violations, and it has a standing agreement with the government to ensure that those handed over to national authorities are treated in accordance with all relevant human rights standards.

Eastern Congo has been plagued by myriad armed rebels since the Rwandan genocide in 1994.

“Thousands of civilians in eastern Democratic Republic of Congo have been affected by crimes committed by forces under Ntabo Ntaberi Sheka’s command, and many still fear the next attack,” she said.

He remained at large for over six years as his troops continued to commit horrific crimes, Sawyer said.

According to the UN, Sheka’s forces and two other armed groups raped at least 387 civilians between July 30 and August 2, 2010, to punish them for alleged collaboration with Congolese government forces.

His soldiers are also accused of razing almost 1,000 homes and businesses and taking about 100 people off into forced labour. 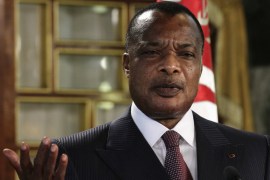