Jordan has said it is looking to question an Israeli security guard who killed two Jordanians at the Amman embassy compound, as Israel points to his diplomatic immunity.

A Jordanian government source, who declined to be named, told AFP news agency on Monday that Israel was “still examining the request” to question the guard involved in Sunday’s incident in which, according to Israeli officials, a Jordanian attacked the guard with a screwdriver.

“There is no need for a diplomatic escalation,” the source said.

The embassy’s staff, including the security guard, returned to Israel late on Monday, according to the office of Israeli Prime Minister Benjamin Netanyahu, who said hours earlier that they would seek to find an agreement.

“We are holding contacts with Jordanian security and government officials in order to bring the incident to a close ASAP,” he said in a statement.

The security guard shot the Jordanian attacker dead, while a second Jordanian there at the time was also killed – reportedly by accident.

A Jordanian security source named the first dead man as 17-year-old Mohammed Jawawdeh and the second as Bashar Hamarneh, a doctor who was in the residential quarter of the embassy at the time of the incident.

He said the Israeli was the deputy director of security at the embassy.

The government source said an initial investigation indicated that Jawawdeh and the security guard “fell out over some dispute which led to a stabbing and a shooting”.

“My son has no interest in politics. He does not follow any extremist ideology,” he said.

“I want to know how the investigation is going and know what happened and what led to the killing of my son.”

Israel and Jordan are bound by a 1994 peace treaty. But tensions have been high in recent days after Israel put in place security measures at the highly sensitive al-Aqsa Mosque compound in east Jerusalem, known to Jews as Temple Mount.

Israel installed metal detectors at entrances to the site after an attack nearby on July 14 that killed two of its policemen. Palestinians view the move as Israel asserting further control over the compound.

Jordan is the official custodian of Muslim holy sites in Jerusalem.

Israeli measures at the flashpoint site sparked angry demonstrations in Amman on Friday, when thousands took to the streets in a protest. 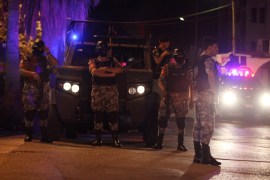 Two Jordanian men were killed and an Israeli man was seriously wounded by gunfire at the Israeli embassy in Amman.