The United Nation’s Middle East envoy has said a solution is needed by Friday to the al-Aqsa Mosque compound crisis in Jerusalem, which threatens to have “potential catastrophic costs well beyond the walls of the Old City”.

“It is extremely important that a solution to the current crisis be found by Friday,” Nickolay Mladenov told reporters on Monday after briefing the UN Security Council behind closed doors.

“The dangers on the ground will escalate if we go through another cycle of Friday prayer without a resolution to this current crisis.”

Also on Monday, the UK’s ambassador to the UN has called on “all parties to denounce violence”.

Matthew Rycroft told reporters at the UN headquarters in New York City that it was important that the full Security Council “stands together to do what we can to help bring peace to the Middle East”.

The Middle East Quartet of Russia, the United States, the European Union and the UN in a statement encouraged Israel and Jordan to work together for de-escalation, noting the special role of Jordan as recognised in its peace treaty with Tel Aviv.

He also highlighted the importance of agreeing on the measures in the future to prevent the recurrence of such escalations and to ensure respect for the historical and legal situation in the holy site, the statement said.

Tensions have escalated since Israel installed metal detectors and CCTV cameras at entry points to the Muslim-administered al-Aqsa Mosque compound after two police guards were shot dead by gunmen there on July 14.

Palestinians view the move as Israel asserting further control over the site.

They have refused to enter the compound in protest and have prayed in the streets outside instead.

Clashes have broken out during protests over the measures, leaving five Palestinians dead and hundreds more injured.

Three Israelis were also killed when a Palestinian entered a house in a West Bank settlement and stabbed them.

Arab League chief Ahmed Abul Gheit on Sunday accused Israel of “playing with fire” with the new security measures, and Turkish President Recep Tayyip Erdogan called them an insult to the Muslim world.

The compound, known to Muslims as the Noble Sanctuary and to Jews as the Temple Mount, is located in occupied East Jerusalem.

It was seized by Israel in the 1967 Six-Day War and later annexed in a move never recognised by the international community. 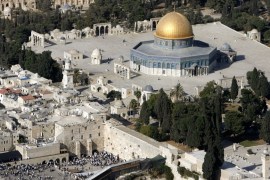