The Tehreek-e-Taliban Pakistan (TTP) group claimed responsibility for the attack, confirming they used a suicide bomber on a motorcycle.

Jam Sajjad Hussain, a senior rescue official, confirmed the death toll, saying that at least 52 wounded had been moved to nearby hospitals.

The explosion took place near one of the city’s largest office towers, home to a government-sponsored technology park.

“It was a very loud noise for a split-second,” said Zaair Hussain, a witness who was working in the building when the explosion occurred. “There are lots of police and ambulances surrounding the site.”

“It seems this was a suicide attacker who was on a motorcycle,” Haider Ashraf, a senior police official, told local television channel Geo News. “Forensic and investigation teams are at the scene. When they have their findings we can share them.”

Ashraf confirmed that at least nine police personnel were among those killed.

Local police official Nazar Abbas, who was at the scene, confirmed to Al Jazeera that it was a suicide attack.

Television footage showed a vehicle badly damaged by the blast, and dozens of police officials cordoning off the area, as well as ambulances at the scene.

No group has so far claimed responsibility for Monday’s attack in Lahore. The city has often been in the crosshairs of violence in the last year, as Pakistan continues its battle against several armed groups seeking to impose a strict interpretation of Sharia law on the country.

The country has made significant gains in the fight against those groups since 2014, and in February launched a new operation, dubbed “Radd-al-Fasad” (Elimination of Chaos), to widen the scope of military operations against them.

That month, at least 13 people were killed when a suicide bomber targeted police posted at a protest demonstration in the heart of Lahore.

In April, another six people were killed when a vehicle carrying government census workers was targeted by a suicide attack in Lahore.

In 2016, Lahore suffered one of Pakistan’s deadliest assaults when a suicide attack in a park killed more than 70 people, including many children. 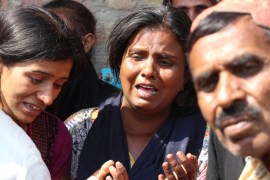 From Lahore to Sehwan, Pakistan’s week of violence

At least 112 people killed as armed groups launch fresh wave of attacks in one of the country’s bloodiest weeks.