Police on motorbikes have fired tear gas to break up an opposition march on Venezuela’s supreme court to stop President Nicolas Maduro from proceeding with his plans to rewrite the constitution of Venezuela.

Thousands gathered in the capital Caracas on Saturday to march on the supreme court, but security forces blocked their way with armoured vehicles and riot shields.

Clashes ensued, injuring several people including student protester Wuilly Arteaga, who has become famous for playing his violin in front of security lines.

“Repression is the only way this regime keeps itself in power,” opposition legislator Luis Florido said at the march, blaming the Maduro government for the latest violence.

The rally was also meant as a show of support for a slate of 33 magistrates appointed by the opposition-controlled congress to replace Venezuela’s supreme court, which is closely allied with Maduro.

Saturday’s protest appeared to be smaller than previous anti-government demonstrations.

Venezuela’s opposition also announced on Saturday it would hold a two-day strike next week among other protests designed to put more pressure on Maduro.

As well as the intended shutdown for Wednesday and Thursday, mass marches would be held on Monday and Friday, officials for the Democratic Unity coalition told reporters.

The opposition coalition launched protests in early April against Maduro, who they accuse of turning Venezuela into a dictatorship and wrecking its economy.

Maduro has accused demonstrators of seeking a coup with the support of the United States.

Venezuelan authorities have routinely responded with tear gas and rubber bullets to nearly four months of street protests. At least 100 people have died in the unrest and thousands more have been injured or detained.

Maduro has shown no sign of giving in, instead promoting the constitutional rewrite as a solution for Venezuela’s political standoff and dire economy.

The government plans to hold a vote next weekend to elect a special congress to overhaul Venezuela’s charter.

The new assembly could disband the existing opposition-led legislature

The opposition, emboldened by a nationwide strike that paralysed parts of Caracas and other Venezuelan cities, has vowed to escalate street tactics to block the July 30 vote.

The government said it would to put 232,000 soldiers on the streets to ensure the vote goes ahead.

In recent days Maduro and pro-government leaders have also warned that once the special assembly is elected, those they brand as “fascists” and “terrorists” could face justice.

In Washington, President Donald Trump’s administration has threatened to take “strong and swift economic actions” if Maduro proceeds with the constitution rewrite.

“The people voted and they rejected this constituent assembly,” read the sign of one man who marched through the streets with a stream of people.

“We are at ‘zero hour,'” metropolitan Caracas Mayor Helen Fernandez said, referring to the opposition’s protest plan. “We will elevate our protest to wherever necessary.” 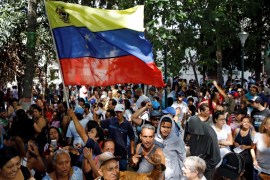 All you need to know about two votes being held in a country wracked with political tensions, economic woes and unrest. 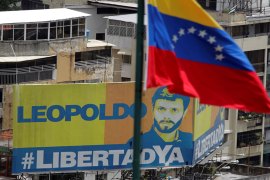 Leopoldo Lopez was arrested in 2014 for ‘inciting violence’ and will serve the rest of his sentence under house arrest.