Israel has installed new security cameras at the entrance to a contested Jerusalem holy site, as officials began indicating it was considering “alternatives” to the metal detectors at the shrine that set off a weekend of violence and raised tensions in the region.

“The Palestinians are very angry about this because they consider this an additional security measure,” he said. “They’ve always maintained that the metal detectors may be the first move in the Israelis taking over the compound.”

Israel introduced the new security measures last week after Palestinian gunmen opened fire from the shrine, killing two Israeli policemen. It said they were a necessary measure to prevent more attacks and were deployed routinely at holy sites around the world.

But Palestinians alleged Israel was trying to expand its control at the Muslim-administered site and have launched mass prayer protests.

“We pray each morning here, and the police assaults us. I intend to keep praying here until Israel removes all what is new,” he added, referring to the security measures.

The cameras were installed just outside Lions’ Gate. Israeli police barred journalists from going through the gate.

However, the Mufti of Jerusalem, Sheikh Muhammad Hussein, told the Voice of Palestine he demands a complete return to procedures that were in place before the initial attack at the shrine, known to Muslims as the Noble Sanctuary and to Jews as the Temple Mount.

On Friday, Abbas announced he would “freeze” ties with Israel “on all levels” until the new security measures Israel imposed at the site after the deadly shooting there were removed.

He did not say whether this means halting security coordination, which would have far-reaching repercussions and sharply raise tensions with Israel.

Three Palestinians were killed, and more than 400 were injured, the Red Crescent said.

Late on Friday evening, a 20-year-old Palestinian identified as Omar al-Abed jumped over the fence of the Halamish settlement and entered a home, and stabbed four members of a family, killing three of them.

“The house of the despicable terrorist will be demolished as soon as possible,” Netanyahu said. “We are also acting against those that incite acts of murder and glorify it.”

Abed said in a pre-attack Facebook post that he expected to be killed in the assault and his father said he was motivated by the violence at the Jerusalem shrine.

The army said soldiers searched the house and measured it in preparation for demolition. Anticipating this, local residents said the family emptied its home of valuables.

Later, the Israeli army sealed off entrances to Abed’s village of Kobar.

Israel placed its forces on high alert after the attack in the West Bank. The Israeli military said it carried out a wave of overnight arrests of 29 Palestinians, including nine members of the Hamas group. 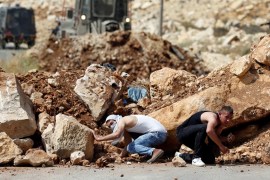 Protesters aged 17 and 18 die of their wounds from separate incidents in the occupied West Bank.