Riot police have taken up position as Moroccans prepare to ignore a city ban on marching in the northern city of al-Hoceima against government neglect.

Organisers were hoping for a million-man march on Thursday, which was expected to get under way at 13:00 GMT.

Al-Hoceima, located on the northern edge of the Rif Mountains adjoining the Mediterranean coast, is the capital of al-Hoceima province. Residents there have long complained of neglect and marginalisation.

Local authorities this week barred the march, but organisers responded with fresh calls for mass participation and solidarity marches across the country.

Hours before kick off, activists said on Facebook that police had blocked protesters from entering the city, citing “high orders”.

Most shops in the city were closed and there were reports of slow internet connection.

Omar Radi, an activist and investigative journalist, said the Place des Martyrs, or place of the martyrs, was full of anti-riot police.

“The police deployment in this place shows that maybe the demonstration can be prevented,” he told Al Jazeera from al-Hoceima.

He said foreign protesters from the Netherlands, France, Germany and Spain were expected to join the rally.

READ MORE: Morocco: What is fuelling unrest in the Rif?

The planned demonstration is part of a steadily growing popular movement known as Hirak in the country’s northern Rif region, which has come to symbolise resentment towards a history of state neglect and violence in the poor coastal area.

The Rif-based popular movement was spurred into action after the murder of a fishmonger crushed to death by local security forces in late October.

Among Hirak’s demands are calls for a serious inquiry into the death of Mohcine Fikri, the fish seller; release of political prisoners; and the construction of universities, hospitals and libraries in Rif.

The current Hirak – or movement – gained further traction in recent months after the arrest of popular leader Nasser Zefzafi, along with 150 of his fellow activists, led to solidarity marches across the country.

A solidarity march in the capital city Rabat last month drew more than 100,000 protesters, the most since the 2011 regional uprisings. 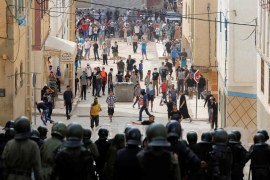 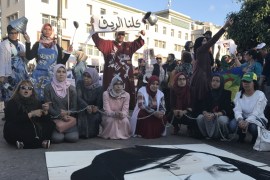 Female activists in Casablanca and Rabat have added their voices to a chorus of anti-government demonstrations.