The Iraqi army says it has completely surrounded fighters of the Islamic State of Iraq and the Levant (ISIL) group in Mosul as it continues to make gains in its final push to retake the city.

According to the military, federal police units recaptured the last bridge over the Tigris River on Saturday, effectively cutting off ISIL’s last remaining escape route.

US-backed Iraqi troops also recaptured a number of neighbourhoods in the Old City.

According to him, “victory in the western part [of the city] will be announced soon”.

“The return of al-Nuri Mosque and al-Hadba minaret to the fold of the nation marks the end of the Daesh state of falsehood,” Abadi said in a statement on Thursday.

A large part of the mosque, which held major significance in the history of ISIL in Iraq, was blown up by the fighters last week.

At least 50,000 civilians, about half of the Old City’s population, are believed to still be trapped in ISIL-held pockets of Mosul.

Those who have escaped said that civilians who remain behind ISIL lines are with little food, water or medicines.

The UN and aid organisations say ISIL has stopped many civilians from leaving, using them as human shields.

“We are seeing the end of Daesh in Mosul as Iraqi forces closed in on the terrorists in the city’s old quarters, but there are civilians who remain trapped in the area or are held as human shields by the terrorists,” the UN Assistance Mission for Iraq said in a statement on Saturday.

“The wellbeing of civilians is a matter of extreme concern for us.”

In June, the Iraqi government said more than 850,000 people have been forced from their homes by the operation, which was launched in October.

On the city’s west, entire blocks have been flattened by clashes, air strikes, and artillery fire. 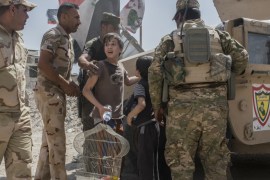