The UN has condemned an increase in civilian deaths in Afghanistan in the first half of 2017, with 1,662 killed and more than 3,500 injured.

Deaths and injuries from suicide bombings and other “complex attacks” rose 15 percent, according to a new report by the UN Assistance Mission in Afghanistan (UNAMA), which has been documenting civilian casualties in the war-torn country since 2009.

At least 40 percent of all civilian casualties were caused by anti-government forces, including the Taliban, and in attacks claimed by the Islamic State of Iraq and the Levant (ISIL) group, the report said.

“The human cost of this ugly war in Afghanistan – loss of life, destruction and immense suffering – is far too high,” Tadamichi Yamamoto, the UN special envoy to Afghanistan, said in a statement.

“The continued use of indiscriminate, disproportionate and illegal improvised explosive devices is particularly appalling and must immediately stop.”

In May, a truck bomb in the heart of the capital, Kabul, detonated by a suicide attacker, killed at least 92 people and wounded nearly 500 in what the UN called the “deadliest incident documented” since the international military intervention that toppled the Taliban in 2001.

Deaths in the capital Kabul accounted for nearly 20 percent of the toll.

“Each one of these casualty figures reflects a broken family, unimaginable trauma and suffering and the brutal violation of people’s human rights,” he said.

“The continuing national tragedy of Afghanistan must not be overlooked.”

Women and children have borne the brunt of the increase in civilian casualties, with UNAMA blaming the use of improvised explosive devices and aerial operations in populated areas for the jump.

A total of 174 women were killed and 462 injured – an overall rise in casualties of 23 percent on last year – while 436 children were killed in the same period, representing a nine percent increase.

Nearly half of Afghanistan’s 34 provinces have seen an increase in civilian deaths in the first six months of the year, mainly owing to the rise in attacks by anti-government forces.

The investigators praised US-backed Afghan police and soldiers, with civilian casualties caused by them 21 percent lower this year.

Deaths and injuries from air strikes, however, increased 43 percent, as both Afghan and US forces increased their air operations.

According to the UN’s figures, more than 26,500 civilians have died and nearly 49,000 have been injured as a result of armed conflict in Afghanistan since January 2009. 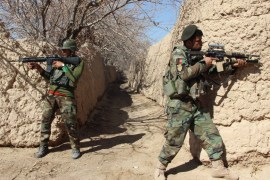