The Philippines‘ largest Muslim rebel group has said a peace accord it is trying to implement with the government is “the best antidote” for violence exemplified by a bloody siege in the southern city of Marawi.

Government and rebel representatives submitted to President Rodrigo Duterte on Monday a new draft law, which aims to establish a more powerful Muslim autonomous region in the country’s south under a 2014 peace deal that stalled in Congress under his predecessor.

Once established, the autonomous government, to be called Bangsamoro, “would be at the forefront of keeping public order and safety, dispensing justice within the bounds of law and addressing the basic requisites of a good life,” Jaafar said.

Duterte pledged to back the bill in Congress as long as it adheres to the Philippine Constitution and promotes the plight of minority Muslims.

“I am for this,” Duterte said to applause from officials and the rebels, who came in business suits. “Within the context of the Republic of the Philippines there shall be a Bangsamoro country.”

The rebels, who dropped their secessionist bid in exchange for broader autonomy, signed a pact with the government to establish a region with more powers and funding for minority Muslims in the south of the predominantly Roman Catholic nation and end a decades-long rebellion.

The commandos managed to kill top Malaysian terror suspect Zulkifli bin Hir, who had long been wanted by the United States, but the large number of police deaths sparked public outrage and prompted politicians to stall passage of the autonomy bill.

“These misguided people have filled the vacuum created by our failure to enact the basic law and fed into the frustration of our people,” Murad said at the ceremony, which was attended by leaders of the Senate and House of Representatives.

“Today, we watch with utter disgust at the destruction that violent extremism has inflicted in the city of Marawi,” Murad said.

Officials said more than 550 people, including 411 fighters, have been killed in nearly two months of fighting in Marawi, a bastion of Islamic faith in the south.

The fighters belong to the disparate Abu Sayyaf and Maute groups, which had pledged allegiance to the Islamic State of Iraq and the Levant (ISIL).

Troops are bracing for a “final push to really break their line and finally clear the whole area of Marawi,” Ano said, adding that “the battleground is now down to less than a square kilometre area”.

Duterte is expected to announce this week whether he will extend a 60-day declaration of martial law in Mindanao to deal with the Marawi attack, the most serious security crisis he has faced since assuming power in June last year. 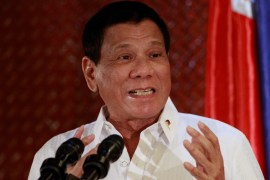