Far-right activists have set sail in a boat with plans to prevent the arrival of Europe-bound boats carrying refugees and migrants in the Mediterranean Sea, sparking criticism from an anti-racism monitor.

Defend Europe, the group behind the journey which began Sunday, said on its fundraising page that its members would set sail in a 422-tonne vessel with a 25-member crew after receiving more than $115,000 in donations in recent weeks.

The crew is expected to arrive in Catania, Italy, on Monday to await the arrival of the boat they will use on their mission, organisers said.

The UK-based organisation, HOPE not hate, which has monitored Defend Europe, reported that the boat was setting sail from Djibouti.

Defend Europe is a far-right organisation and comprises members of the Identitarian Movement, a pan-European conglomerate of activists who rally against Muslims and refugees.

The movement can be traced back to France in 2002 when the far-right Bloc Identitaire party established a youth wing.

‘A confrontational and dangerous project’

HOPE not hate said in a statement that Defend Europe threatens to “hinder the lifesaving work of search-and-rescue NGO ships in the Mediterranean”.

“This confrontational and dangerous project is organised by far-right activists with a long track record of anti-Muslim and anti-immigrant activism … and while organised by Europeans, it is being supported, funded and promoted by the extreme far-right around the world,” HOPE not hate said in a separate press briefing.

Defend Europe says it will reach the refugees and migrants before NGO-operated rescue boats and return them to the Libyan coastguard to stop the “deadly illegal migration to Europe”.

“This massive illegal migration is changing the face of our continent,” Defend Europe wrote on its fundraising page.

“We are losing our safety and our way of life and there is a danger that we Europeans will become a minority in our own European homelands.”

In May, Defend Europe activists set sail on a dinghy and unsuccessfully attempted to block a rescue boat manned by Doctors Without Borders (known by its French acronym, MSF).

During the first four months of 2017, more than one-third of rescue operations in the Mediterranean were carried out by NGOs and private rescue teams.

In a statement provided to Al Jazeera, the Save the Children charity said Defend Europe’s plans to disrupt search-and-rescue missions “are deeply concerning” and “ignore the moral and legal obligation” to save lives in the Mediterranean.

“Without NGOs and other search-and-rescue actors, many more lives, like the men, women and children we have rescued, would be lost,” the group said, adding that more than 5,000 people drowned en route to Europe last year.

“These activists wish to disrupt efforts to bring these people to safety.”

More than 85,000 refugees and migrants have come to Italy so far this year, according to data released by the interior ministry last week.

Among the new rules is a ban on making phone calls or firing flares, which the Italian government claims could signal to human traffickers when it is safe to send a boat to sea.

Arguing that the new code of conduct will severely restrict the ability of humanitarian and aid groups to carry out their work, Amnesty International and Human Rights Watch condemned the measures in a joint statement.

READ MORE: Desperate journeys – For refugees in Europe, life is a nightmare

“Perversely, the proposed code of conduct for NGOs saving lives in the Mediterranean could put lives at risk,” said Iverna McGowan, director of the Amnesty International’s European Institutions Office, in the statement.

More than 2,000 refugees and migrants have died in the central Mediterranean since January 2017 according to the International Organisation for Migration’s statistics. 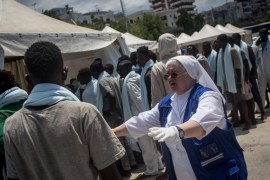 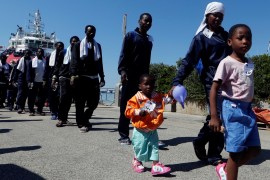 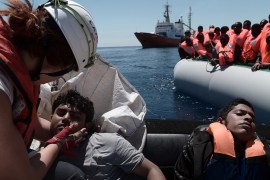