French President Emmanuel Macron has called for a resumption of long-stalled peace talks between Israel and Palestine based on a two-state solution.

Macron said on Sunday that France was ready to apply diplomatic levers towards renewed negotiations, but gave no specifics.

He did not indicate any eagerness for France to spearhead such negotiations after a fruitless French diplomatic effort early this year.

“I call for a resumption of negotiations between Israel and the Palestinians in the framework of the search for a solution of two states, Israel and Palestine, living in recognised, secure borders with Jerusalem as the capital,” said Macron after talks with Israeli Prime Minister Benjamin Netanyahu in Paris on Sunday.

He warned that continued Israeli settlement construction could threaten such negotiations and eventual peace prospects.

At his side, Netanyahu said: “We share the same desire for a peaceful Middle East.” But he did not elaborate on eventual peace talks.

His office said Macron was concerned about Israel’s security but also worried that Netanyahu was backing away from commitment to a two-state solution.

Pro-Palestinian and other activists protested Netanyahu’s visit, criticising Israeli settlement policy and the blockade of Gaza. 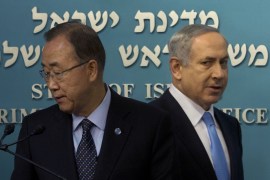 UN secretary-general says the opportunity for a two-state solution is quickly disappearing amid lack of negotiations.