The United States will maintain good relations with Qatar, President Donald Trump has told an American news channel, adding that the US airbase will not be moved out of the Middle Eastern country despite the diplomatic and economic blockade imposed on Doha by the Saudi-led group.

Qatar is home to the Al-Udeid airbase that holds the forward headquarters of Central Command and hosts around 10,000 American troops.

But while saying there are “10 countries willing to build us another base”, Trump said, “we will not have a problem with the military base.”

“We are going to have a good relationship with Qatar and not going to have a problem with the military base,” Trump said in an interview with CBN News aired on Wednesday.

“If we ever had to leave, we’d have 10 countries willing to build us another one. And they’ll pay for it. The days of us paying for things are largely over.”

Following the Arab countries’ decision to impose the blockade on Qatar last month, Trump, in a series of tweets, seemed to back the move, saying his trip to the Middle East is “already paying off” after he “stated there can no longer be funding of radical Ideology”.

“I made a speech in Saudi. I said we got to stop funding of terrorism. They [Qatar] were known as funders of terrorism. We can’t have wealthy countries funding terrorism,” Trump said in Wednesday’s interview.

He visited Saudi Arabia in May on the first leg of his first foreign trip since taking office and held a series of meetings with the king and other Arab and Muslim leaders.

During the two-day visit, Trump also signed an arms deal with Saudi Arabia worth almost $110bn – something he alluded to in the interview.

“I mean they were signing big people from the biggest countries and companies, General Electric and all of the big companies, many of them were there getting contracts, all good work for our workers – that was one of the things.”

Qatar is also among the countries which purchase military equipment from the US.

Last month, the US and Qatar signed a deal for the purchase of F-15 fighter jets with an initial cost of $12bn.

On Thursday, the White House said Trump spoke to the Saudi King Salman by phone and discussed efforts to resolve the dispute.

The anti-Doha quartet issued a list of 13 demands that included shutting down Qatar’s Al Jazeera Media Network, sever all alleged ties with the Muslim Brotherhood and with other groups, including Hezbollah, al-Qaeda and ISIL (also known as ISIS), limiting Qatar’s ties with Iran and expelling Turkish troops stationed in the country.

Qatar denies the charges of “extremism” and called the demands “unrealistic”.

In an interview published by The Times newspaper on Wednesday, Noura Al Kaabi, the UAE minister for the federal national council, said the Emirates sought “fundamental change and restructuring” of Al Jazeera rather than to shut it.

“The staff at the channel can keep their jobs and Qatar can still fund a TV channel but not one which provides a platform for extremists and where the English channel is a protective shield for the much more radical Arabic one,” Al Kaabi told The Times.

Foreign diplomats, including US Secretary of State Rex Tillerson and British Foreign Secretary Boris Johnson, visited the region and called for direct talks to solve the crisis.

During Tillerson’s visit to Doha, Qatar and the US also signed an agreement to help combat “terrorism financing”. 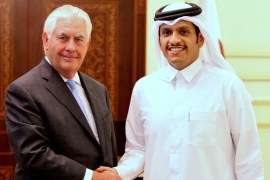 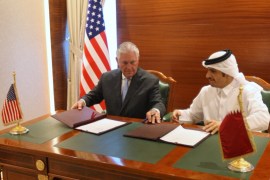 A statement by four Arab states said their embargo against Qatar would continue until Doha agrees to their demands.