Philippine President Rodrigo Duterte made another joke about rape, condemning the crime while saying he would congratulate a rapist who could carry out his crime on an international pageant winner, even knowing that he could be executed later.

Duterte made the joke in a speech to Filipino diplomats in his southern home town of Davao, as he defended his war on drugs, which has left thousands dead since he took office last year.

“What I don’t like are kids (being raped.) You can mess with, maybe Miss Universe. Maybe I will even congratulate you for having the balls to rape somebody when you know you are going to die,” for your crime, he said on Friday, implying the rapist would be lynched.

It was the latest in a series of off-colour jokes by Duterte who openly boasts of having mistresses and often makes sexual remarks about women.

In May, he joked that soldiers, who are involved in an ongoing operation in the southern city of Marawi, could rape up to three women.

During his campaign for president in 2016, he was also criticised for joking about an Australian missionary worker, who was raped and later killed in Davao in 1989, while he was mayor of the city.

“I was angry that she was raped. But she was so beautiful. The mayor should have been the first. What a waste,” he was quoted as saying in Filipino.

“Scarier and more upsetting for me is that people still laugh at them,” she said in a statement to Al Jazeera.

“I think the challenge for us now is to not get used to it. The first thing we need to do is to stop laughing at these rape jokes because they are not funny.”

She also said Duterte could be doing his latest “word stunts” to divert the country’s attention from his “most glaring incompetencies”, the government’s battle against the ISIL-inspired Maute Group in Marawi, which has been going on for almost two months.

In the latest incident, Duterte, who was speaking in his rambling style, also boasted to the diplomats that he faked tuberculosis to escape mandatory military training in college.

But he also reiterated his vow to continue his bloody war on drugs despite accusations that thousands of suspects had been killed by police and vigilantes since he took office.

“Human rights? That is bullshit to me,” he said, recalling how he called then US President Barack Obama “a son of a whore” after Washington criticised the wave of killings.

Police said at least 3,200 people were slain in their anti-drug operations but Human Rights Watch said that at least 7,000 suspected drug users and dealers were killed since Duterte took office in 2016. 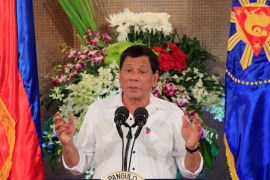 Philippine leader rejects calls to lift military rule in Mindanao, where hundreds have been killed.