Floods in India’s northeast have killed at least 83 people and led to the death of three rare one-horned rhinoceros at a national park that has the world’s largest concentration of the species.

The floods caused by torrential rains across the hilly states of Assam, Arunachal Pradesh, Nagaland and Manipur over the past two weeks, have also triggered landslides.

In all, more than two million people have been displaced, authorities say.

“Relief and rescue operations are going on a war footing.”

A one-horned rhinoceros drowned on Friday, taking the toll of the endangered animals in the flooding to three, Assam’s forest minister, Pramila Rani Brahma, told Reuters.

The Kaziranga National Park, a UNESCO world heritage site, is home to an estimated 2,500 rhinos out of a world population of some 3,000.

Nearly 60 other animals, mostly deer and wild boars, have been killed in the floods, she said. 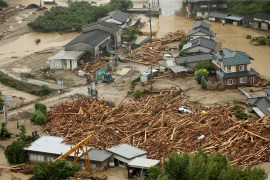 At least 11 people are missing and almost 500,000 have been evacuated from their homes after huge amounts of rain fell on southern Japan on Wednesday. The island of Kyushu caught the heaviest rain, with the prefectures of Fukuoka and Oita suffering the most. It is reported that an incredible 774 millimetres of rain fell […] 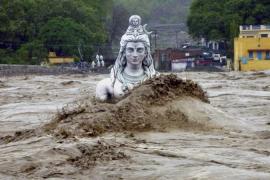 India floods: The anger of Ganga

Could it be that last month’s deadly floods in India were the result of a god’s wrath?