The head of ISIL in Afghanistan, Abu Sayed, was killed in an attack on his headquarters in Kunar province earlier this week, the Pentagon said on Friday.

Spokeswoman Dana White said in a statement on Friday that other members of the Islamic State of Iraq and the Levant (ISIL, known as ISIS) were killed in the raid on Tuesday.

“US forces killed Abu Sayed, the emir of Islamic State of Iraq and Syria – Khorasan Province (ISIS-K) – in a strike on the group’s headquarters in Kunar Province, Afghanistan, July 11,” White said in the statement, referring to ISIL’s other acronym.

“The raid also killed other ISIS-K members and will significantly disrupt the terror group’s plans to expand its presence in Afghanistan.”

Sayed is the third ISIL leader in Afghanistan to be killed since July 2016.

READ MORE: Is the military strategy in Afghanistan flawed?

The US military had said Hasib’s death would “help reach our goal of destroying them in 2017.”

The compound used by Hasib in Nangarhar province was not far from the spot where on April 13, the US military dropped the largest non-nuclear bomb it has ever used in combat, hitting ISIL positions.

The deployment of the so-called Mother Of All Bombs (MOAB) killed at least 95 fighters, according to the Afghan defence ministry, but fighting in the area has continued.

ISIL established a presence in Afghanistan in 2015 and overran large parts of Nangarhar and Kunar provinces, near the Pakistan border.

However, their part in the Afghan conflict had been largely overshadowed by the operations against the Taliban. 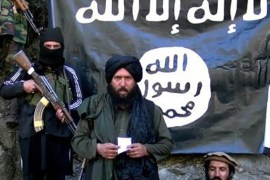