An influential US Republican senator has criticised the Saudi Crown Prince, Mohammed bin Salman, over a blockade on Qatar by the kingdom and three other Arab states.

The comments by Bob Corker, chairman of the US Senate Foreign Relations Committee, came as tensions in the region continue over the crisis, with US Secretary of State Rex Tillerson expected to make an unscheduled stop in Doha on Thursday.

“The amount of support for terrorism by Saudi Arabia dwarfs what Qatar is doing,” Corker said on Wednesday.

Corker said he was “really disappointed to see what Saudi Arabia did after having a great summit and bringing everybody together”, referring to May’s Riyadh conference that saw leaders of the GCC and other Arab states meet US President Donald Trump.

“I think this is quite possibly a rookie mistake by a crown prince who I think could be the future for Saudi Arabia,” Corker added.

The Tennessee senator made the comments while addressing the former US ambassador to Israel during a legislative committee hearing.

Al Jazeera’s Heidi Zhou-Castro, reporting from Washington, DC, said the Saudi crown prince is “widely seen as among the blockade’s chief architects and a chief organiser of the alliance behind it”.

She said that Corker has been among the blockade’s strongest US critics, adding that the senator has threatened to block weapons sales to members of the GCC until there was a clear path for settling the dispute.

Andreas Krieg, an assistant professor at King’s College London, told Al Jazeera that Corker’s comments are a lot to take in for the Saudi-led group.

Corker’s comments came as Tillerson wrapped up the third leg of his four-day trip to the Gulf aimed at helping solve the GCC crisis.

Having shuttled between Kuwait, Qatar and Saudi Arabia in an effort to help solve the GCC crisis, Tillerson is set to make an unexpected return to Doha on Thursday before returning to the United States.

On Wednesday, Tillerson met the Saudi king, crown prince and his counterparts from the Saudi-led quartet.

The Jeddah visit followed meetings in Doha with the Qatari emir and foreign minister on Tuesday.

Tillerson told reporters that the Qatari government had “reasonable” views during the crisis.

“I think Qatar has been quite clear in its positions, and I think those have been very reasonable,” he said.

Tillerson and the Qatari foreign minister also announced that the US and Qatar had signed an agreement on combating “terrorism” and its financing during the visit.

Foreign Minister Sheikh Mohammed bin Abdulrahman Al Thani said the memorandum of understanding was not related to the current dispute.

But Saudi Arabia, Egypt, Bahrain and the UAE called the agreement “insufficient” and the result of “repeated calls” from the Saudi-led group over the past few years. 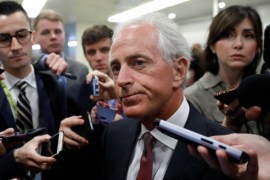 Editorial Board of The New York Times says nothing good can come of ‘dangerous’ GCC crisis if it is allowed to persist.