A federal judge on Tuesday halted the deportation of 1,400 Iraqi nationals, including many Christians fearing persecution, while courts review the orders to remove them from the United States.

Judge Mark Goldsmith issued a 24-page opinion asserting jurisdiction in the case over the objection of the Department of Justice, which argued US district judges do not have jurisdiction.

“This Court concludes that to enforce the Congressional mandate that district courts lack jurisdiction – despite the compelling context of this case – would expose Petitioners to the substantiated risk of death, torture, or other grave persecution before their legal claims can be tested in a court,” Goldsmith wrote in a 24-page opinion.

Goldsmith earlier blocked the deportations while he considered whether he had jurisdiction over the case.

Many of the Iraqis, including 114 rounded up in the Detroit area last month who are mostly Christians, fear attacks over their religion if returned to Iraq. The government says they face deportation because they committed crimes in the US.

Goldsmith earlier extended a ruling suspending the deportation of the 114 while he considered jurisdiction to all Iraqi nationals in the US.

The US government said 1,400 Iraqis are under deportation orders nationwide, though most are not in custody.

Some of those arrested came to the US as children and committed their crimes decades ago, but they had been allowed to stay because Iraq previously declined to issue them travel documents.

But legal action over deportations took on new urgency after Iraq agreed in March to start accepting US deportees as part of a deal that removed the country from President Donald Trump‘s revised temporary travel ban on several predominantly Muslim countries.

The American Civil Liberties Union said a suspension is necessary so Iraqi nationals can go to immigration court and argue that their lives would be in jeopardy if returned to their native country.

Without some intervention, the ACLU contends that people could be deported before their case is called.

Goldsmith scheduled a Wednesday hearing to discuss several matters in the case, including a request from the Iraqis for a preliminary injunction barring the deportations. 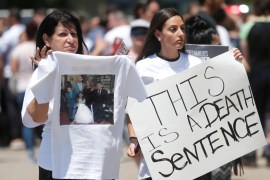 US judge blocks deportation of Iraqis

Judge Mark Goldsmith sides with ACLU lawyers who argue those being deported could face persecution, torture or death. 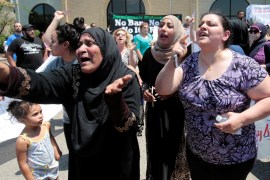 Officials say majority of those have ‘criminal convictions’ but activists argue they risk being killed if deported.