US Secretary of State Rex Tillerson has ended talks with ministers from Saudi Arabia and three Arab allies over how to end a month-long rift with Qatar, but there was no immediate word of a breakthrough.

Tillerson met the foreign ministers in Saudi Arabia’s Red Sea city of Jeddah on Wednesday in pursuit of an end to the worst dispute in decades among the US-allied Gulf Arab states.

At that meeting, the Saudi crown prince praised the “continuous cooperation” between his country and the US.

Al Jazeera’s Rosiland Jordan, reporting from Kuwait, said Tillerson had left Jeddah and returned to Kuwait for another round of talks with the country’s emir, Sheikh Sabah Al Ahmad Al Sabah.

Kuwait is trying to mediate the dispute.

Tillerson is scheduled to return to the US on Thursday, our correspondent said.

Aside from the details about who Tillerson met in Jeddah, there is no information about what was discussed or agreed upon during those meetings, she said.

During that meeting, Tillerson and the Qatari foreign minister announced that the US and Qatar made an agreement on combating “terrorism” and its financing.

Any resolution of the impasse must address all the key issues demanded by Saudi Arabia and its allies, a senior UAE official told Reuters before the Jeddah talks.

US officials had earlier said Tillerson does not expect an immediate breakthrough, which they warned could be months away.

Rather, they said, he wants to explore possibilities for more negotiations.

But in another sign of the dispute continuing to simmer, UAE Minister of State for Foreign Affairs Anwar Gargash sent a formal complaint to the UN high commissioner for human rights on Wednesday alleging that the Qatar-based Al Jazeera network supported “terrorism”, sectarianism and anti-Semitism.

“I think it will ease tensions but it’s just postponing the problem, which will grow in the future.”

The four countries slapped sanctions on Qatar on June 5, accusing it of financing “extremist” groups and allying with the Gulf Arab states’ regional rival Iran – allegations that Doha has repeatedly denied. 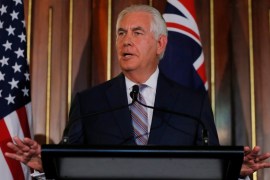 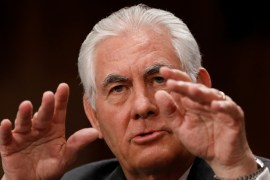