An agreement between Qatar and the United States to help combat “terrorism financing” is “insufficient”, the four Arab states that imposed a blockade on Doha said in a joint statement on Tuesday.

The memorandum of understanding announced in Doha during a visit by US Secretary of State Rex Tillerson is “the result of pressure and repeated calls over the past years by the four states and their partners upon Qatar to stop supporting terrorism,” claimed Saudi Arabia, Bahrain, Egypt, and the United Arab Emirates – allegations that Qatar strongly denies.

“This step is insufficient,” said the statement carried by Saudi state news agency SPA, adding that the four states would “carefully monitor the seriousness of Qatari authorities in combating all forms of financing, supporting and harbouring terrorism”.

The statement by the four states said the embargo against Qatar would continue until Doha “commits to comprehensively implement the just demands, including confronting terrorism and establishing stability and security in the region”.

It called for “strict monitoring controls to ensure its (Doha’s) seriousness in getting back to the natural and right path”.

The four countries on June 5 severed all diplomatic ties and suspended transport links with Qatar over accusations Doha supported “terrorism” and was too close to Iran – accusations Qatar strongly rejects.

Qatar refused to comply with a list of 13 demands issued by the Saudi-led group on June 22, including closing Al Jazeera, downgrading ties to Iran, and shutting a Turkish military base in Doha.

US and Qatar’s deal

At a joint news conference in Doha, Tillerson said the agreement was built on decisions made at a Riyadh summit in May to “wipe terrorism from the face of the Earth”.

Mohammed bin Abdulrahman said Qatar was the first country in the region to sign an agreement with Washington to counter “terror funding” and called on what he called upon the “siege” nations to follow suit and sign their own agreements with the US.

Giorgio Cafiero, chief executive of Gulf State Analytics, told Al Jazeera that the deal signed by Qatar and the US had been a boost for Doha.

“It puts Qatar in a position where they can say that the accusations about sponsorship of terrorism and extremism are coming from some states which have yet to sign such an agreement with Washington,” he said.

“This is going to add momentum to Qatar’s argument that it is complicit with the West’s standards for combating the financing of terrorism and also military operations against terrorist organisations. This will certainly put more pressure on Saudi and the other members of the Riyadh-Abu Dhabi [group] to make similar moves on their part.” 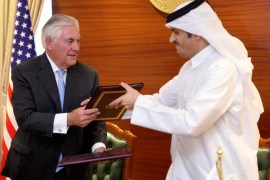 US Secretary of State Rex Tillerson praises Qatar’s commitment to help track down and disable sources of terror funding. 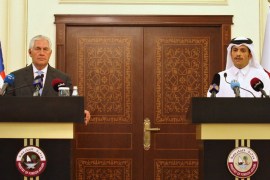