Hacked emails obtained by the Turkish-based Anadolu news agency showed that a former Al Jazeera cameraman, who is suing the network, collaborated with Egyptian security agencies while working with the Doha-based television channel.

In an article published on Wednesday, Anadolu reported that Mohamed Fawzy had been providing Egyptian security agencies details of Al Jazeera programmes.

In one incident, he reportedly spoke about an event held by the Muslim Brotherhood‘s Freedom and Justice Party at Harvard University that would be aired on Al Jazeera television.

Fawzy also reportedly coordinated with security agencies regarding his lawsuit against the network.

Fawzy is suing Al Jazeera for $7.4m for neglect and endangering the lives of journalists working in Egypt. He said Al Jazeera sent him to Cairo knowing that “it was guaranteed” he would be arrested.

Fawzy, along with a group of journalists, was detained in Egypt in 2013 on charges of stoking unrest and publishing false news.

After he was released from prison, he sought refuge in the United States, where he filed the complaint against Al Jazeera in September 2016.

In one of the emails obtained by Anadolu, Fawzy reportedly complained to an Egyptian security agent named Temo Kamal, for destroying his life by getting him work with the Qatari television.

He reportedly asked Kamal to intervene to reverse a government decision to ban him from entering Egypt, wondering how the regime “was keen on destroying his loyalists”.

Kamal responded in another mail that he had helped free Fawzy from prison, after being detained along with other Al Jazeera journalists in 2013.

He also blamed Fawzi for working with Al Jazeera, saying that Fawzy had sought to cooperate with the security agencies in the first place.

Anadolu Agency had sought comments from Fawzy and Kamal, but both refused to give comment.

The emails also revealed that Fawzy had contracted with the same law firm of his former Al Jazeera colleague Mohamed Fahmy, who is also suing the network, the report said.

It also shows that the same agency that provided media coverage for the lawsuits of both Fahmy and Fawzy is the same.

Fahmy is currently taking legal action against Al Jazeera and is suing for over $100m, saying the network knowingly endangered his life.

The New York Times reported that Fahmy received funding from the United Arab Emirates ambassador to the US, Yousef al-Otaiba, to cover his legal expenses against Al Jazeera after his release.

Al Jazeera is the focus of a dispute between Qatar and four Arab states, who severed all trade and diplomatic ties with Doha, accusing it of supporting terrorism – an allegation the country denies.

The four states – Saudi Arabia, Egypt, the UAE and Bahrain – presented Qatar a list of 13 demands, which include the closure of Al Jazeera, or face further sanctions. 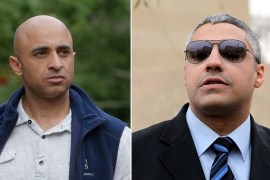 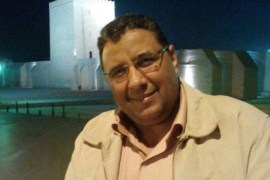 Al Jazeera denies the allegations against Mahmoud Hussein and calls for his immediate release.