US Secretary of State Rex Tillerson told reporters in Doha that the Qatari government had “reasonable” views in the month-old diplomatic crisis with Arab neighbours.

“I think Qatar has been quite clear in its positions, and I think those have been very reasonable,” Tillerson said after his arrival in Doha on Tuesday.

A Saudi-led quartet of countries accuse Qatar of funding “terrorism”, an accusation Qatar rejects as “baseless”.

In a joint news conference, Tillerson and the Qatari foreign minister announced that the US and Qatar made an agreement on combating “terrorism” and its financing during the visit.

Foreign Minister Sheikh Mohammed bin Abdulrahman Al Thani said the memorandum of understanding has nothing to do with the current dispute.

Tillerson also held talks with Qatar’s Emir Sheikh Tamim bin Hamad Al Thani on the second leg of his four-day trip to the Gulf to help seek a resolution to the crisis.

ANALYSIS: Qatar-Gulf crisis – Who are the ‘terrorists’?

The visit to Doha follows a meeting with the Emir of Kuwait, Sheikh Sabah Al Ahmad Al Sabah, and other senior Kuwaiti officials on Monday.

On Wednesday, Tillerson will meet the foreign ministers of the countries leading the boycott against Qatar – Saudi Arabia, the United Arab Emirates, Bahrain and Egypt – in Jeddah.

Saudi Arabia, the UAE, Bahrain and Egypt cut ties with Qatar on June 5 and imposed a land, air and sea blockade on the country.

“After some initial missteps from the White House, in which the president seemed to take sides with the Saudis and their allegations, the US position now is to try to shore up the Kuwait efforts to mediate the crisis and to try to bring some pressure from Washington, if it’s appropriate,” she said.

Senior Tillerson adviser RC Hammond said the package of demands, as issued by Qatar’s neighbours, was not viable, but said there were individual items on the list “that could work”. 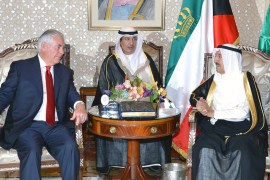 US officials say the secretary of state does not expect an immediate breakthrough on his four-day trip to the Gulf.

US Secretary of State Rex Tillerson’s trip marks a new level of involvement in US efforts to help end the Gulf dispute. 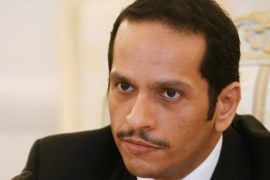 Sheikh Mohammed bin Abdulrahman Al Thani to meet Rex Tillerson after US questions cause of blockade against Qatar.