A court in Bahrain has sentenced prominent human rights activist Nabeel Rajab to two years in jail after finding him guilty of spreading “fake news”, a judicial source said.

The source, quoted by the official BNA news agency, said on Monday that Rajab was convicted “of disseminating false news, statements and rumours about the internal situation of the kingdom that would undermine its prestige and status”.

The verdict, which the source said can be appealed, was immediately condemned by Bahraini and international human rights watchdogs.

WATCH: The battle for Bahrain

Rajab, 52, was sentenced in absentia as he has been hospitalised since April, said the Bahrain Institute for Rights and Democracy.

The judicial source said, however, that “all legal guarantees” were provided to Rajab and that his lawyer was present for the proceedings.

“This outrageous sentence against someone speaking the truth exhibits the brutality of the Bahraini government and its heinous crimes and that of its kangaroo court,” he said.

‘Chokehold on freedom of expression’

“We believe societies are strengthened, not threatened, by expressions of opinion and dissent, and that opposition voices can play a vital role helping societies become more tolerant and inclusive,” read a statement released by the US state department on Monday.

“We have repeatedly expressed our concern about Nabeel Rajab’s case, and we continue to strongly urge the government of Bahrain to abide by its international obligations and commitments to respect human rights and fundamental freedoms, including the freedom of expression,” added the statement.

Bahrain, however, is also a close ally of the United States and hosts the Navy’s 5th Fleet. President Donald Trump has previously touted Washington’s “wonderful relationship” with Bahrain. 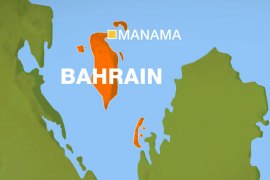 Activist detained in Bahrain at ‘high risk of torture’

Amnesty says Ebtisam al-Saegh was ‘beaten and sexually assaulted’ by security forces during a previous detention in May. 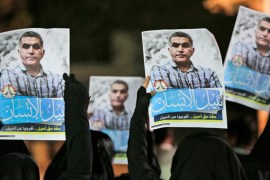 Court orders release, but prosecutor rules it out, citing other charges pending against the Bahraini activist.