Islamabad, Pakistan – Pakistan’s Supreme Court has resumed deliberations in a corruption case that could unseat Prime Minister Nawaz Sharif, after investigators tasked with probing the allegations submitted their findings to judges on Monday.

The investigators have recommended that a case be filed against Sharif in the a National Accountability Court after concluding that there were “significant gap[s]” in Sharif’s family’s ability to account for their assets.

“Failure on the part of all respondents to produce the requisite information confirming ‘known sources of income’ is […] tantamount to not being able to justify assets and the means of income,” read the conclusion of the report, a partial copy of which was obtained by Al Jazeera.

Sharif himself appeared before the inquiry on June 15, while his sons Hassan and Hussain were questioned multiple times during the course of proceedings. Maryam Nawaz, Sharif’s daughter and political heir apparent, was also questioned.

The JIT submitted its report, along with two boxes of evidence, to the apex court on Monday morning amid tight security.

The court adjourned Monday’s proceedings until July 17, when lawyers for both sides will be given a chance to present their arguments on the investigating team’s findings.

The allegations focus on Sharif’s previous two terms as prime minister in the 1990s, with opposition politician Imran Khan and others alleging that Sharif and his family illegally profited from his position.

The 2016 leak of 11.5 million documents from Panama law firm Mossack Fonseca – dubbed the Panama Papers – showed that three of Sharif’s children were listed as beneficiaries for three offshore companies registered in the British Virgin Islands.

Owning offshore companies is not illegal in Pakistan, but Sharif’s political opponents allege the Sharif properties in London were obtained through corrupt means and that he did not fully declare his assets to tax authorities.

The probe has expanded to include corruption allegations regarding the sale and purchase of various industrial units in Pakistan, the United Arab Emirates and Saudi Arabia.

Khan, the chief of the Pakistan Tehreek-e-Insaf party, lauded the report as a vindication of his years-long campaign to unseat the prime minister.

“Nawaz Sharif has no moral standing left,” Khan told reporters at a news conference on Monday.

Sharif’s party leaders, meanwhile, said that the report did not prove any specific wrongdoing on the part of the prime minister.

Sharif denies any wrongdoing, saying the sources of all of his family’s assets can be legally accounted for.

On Saturday, Sharif appeared to take a defensive stance before the inquiry report’s submission, with leaders from his PML-N party vowing to reject the report as it did not include testimony from former Qatari Prime Minister Sheikh Hamad bin Jassim bin Jaber Al Thani.

Sharif contends that the former Qatari prime minister’s father was a business partner, and that the apartments in London were bought using funds transferred from Qatar.

Sheikh Al Thani was invited to testify before the inquiry, or to record his testimony at the Pakistani embassy in Qatar.

He rejected the invitation, saying he was not subject to Pakistani law, but invited investigators to visit him in the Qatari capital Doha to record a statement. The investigators did not do so.

In a related development, a case was registered on Monday against the Securities and Exchange Commission of Pakistan chief Zafar Hijazi for tampering with records of Sharif-owned business while the investigating team was completing its inquiry.

With the Supreme Court now taking up the case once more, Sharif’s political career hangs in the balance. If the court deems him to have hidden assets or not satisfactorily explained the source of his funds, it could disqualify him from holding public office.

In such a case, he would be removed from office, with members of parliament tasked with electing a new prime minister.

Sharif’s PML-N party holds a comfortable majority in parliament and in Punjab, the country’s most populous province, but any disqualification of the party chief would be a huge blow to the party ahead of a scheduled general election next year. 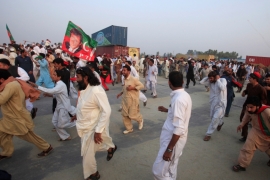