Washington, DC – Senator Bob Corker, the Republican chairman of the Senate Foreign Relations Committee, said he does not yet know how the Trump administration plans to resolve the standoff between Qatar and Gulf Arab states – but he hopes talks can be initiated soon.

“I don’t know. I hope that how it can be resolved is that the Saudi Arabians and others will send forth a very clear list of what they are looking for as it relates to a behavioural change,” Corker told Al Jazeera in a Senate hallway interview on Thursday.

After President Donald Trump initially responded to the crisis with tweets slamming Qatar for alleged support of “terrorism” in the region, Corker said he expects the Trump administration to work equally with both sides going forward.

US Department of State officials have suggested offers by Turkey and Kuwait to mediate the conflict should be taken up. Trump offered Wednesday to personally mediate the dispute.

“We’ve got to be concerned about putting our thumb too heavily on one side of the scale when we are dealing with people in the region we want to maintain a relationship with,” Corker said.

Qatar hosts 10,000 US troops and military personnel at the Al Udeid Air Base, home to two US air force wings and the forward headquarters of the US Central Command, responsible for ongoing American combat operations in the Iraq, Afghanistan and Syria.

“We have got to deal with all of the people in the region. We have got some assets in Qatar that I visited not too long ago that are very important to us,” Corker said.

The US has five bases in Saudi Arabia. Secretary of Defense James Mattis had visited Saudi Arabia, Egypt, Israel and Qatar in an April trip designed to focus on US strategic alliances in the region.

The disarray in US relations with Qatar, Saudi Arabia, and other Arab nations follows Trump’s May 20-21 visit to Riyadh where critics of the president say he gave the Saudis too much of a signal they had a free hand in the region.

“I think Saudi Arabia is emboldened by Trump’s visit and the blank cheque that they’ve gotten. Their reaction to Qatar is just one piece of that,” Senator Chris Murphy told Al Jazeera.

Murphy, a Democrat, is the lead sponsor of a measure on weapons transfers to Saudi along with Senator Rand Paul, a Republican. The vote is symbolic and specifically related to munitions the Saudis would use in Yemen where legislators are concerned about civilian casualties and a major cholera outbreak.

Murphy’s resolution would not block the proposed sale of 150 Black Hawk helicopters to Saudi Arabia, part of Trump’s $110bn announced deal with the Saudis. The Black Hawk is made by Sikorsky, a Lockheed Martin subsidiary, headquartered with 8,000 employees in Murphy’s home state of Connecticut.

Murphy said he expects “a close vote” on his resolution of disapproval of the sales of guided missiles with more than 40 senators voting in favour. He would need more than 50 to succeed in blocking that portion of Trump’s arms deal with the Saudis.

What’s significant about the upcoming vote, however, is that support for disapproval is expected to exceed the 27 “yea” votes Murphy won for a 2016 Senate measure to block tank sales to Saudi Arabia by the Obama administration.

Corker said he would not support the disapproval resolution and cited a decision by Secretary of State Rex Tillerson in March to lift human rights conditions for a major sale of F-16 fighter jets to Bahrain.

“We do think human rights should be addressed. I’m a strong, strong proponent of that. Tying them to arms sales is not the appropriate place to do that,” Corker said.

“It is important for us to play a role in helping stifle the amount of conflict that is going on there and to allow a move-on towards the humanitarian support that needs to be taking place” in Yemen, Corker said. 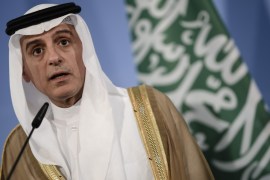 Joint statement names 59 individuals and 12 organisations with links to Qatar on ‘terror list’.