At least 14 people, most of them civilians, have been killed after soldiers clashed over food aid in Somalia’s drought-stricken city of Baidoa.

The fighting broke out at a distribution site on Friday after a group of soldiers tried to steal food sacks meant for refugees and other soldiers guarding the aid stopped them, Colonel Isaq Hassan said.

At least 20 people were injured. Some were in critical condition, a nurse at Baidoa’s main hospital, Mohamed Ahmed, told the Associated Press news agency.

READ MORE: Will the ‘Long Rains’ save Somalia?

Somalia is one of four countries singled out by the UN in a $4.4bn aid appeal to avert catastrophic hunger and famine, along with Nigeria, South Sudan and Yemen.

The UN has said that together they make up the world’s largest humanitarian disaster in more than 70 years.

Thousands of people have been streaming into Baidoa in the southwest and other Somali cities in search of food and support, overwhelming local and international aid agencies.

More than half a million people across the country have been displaced. 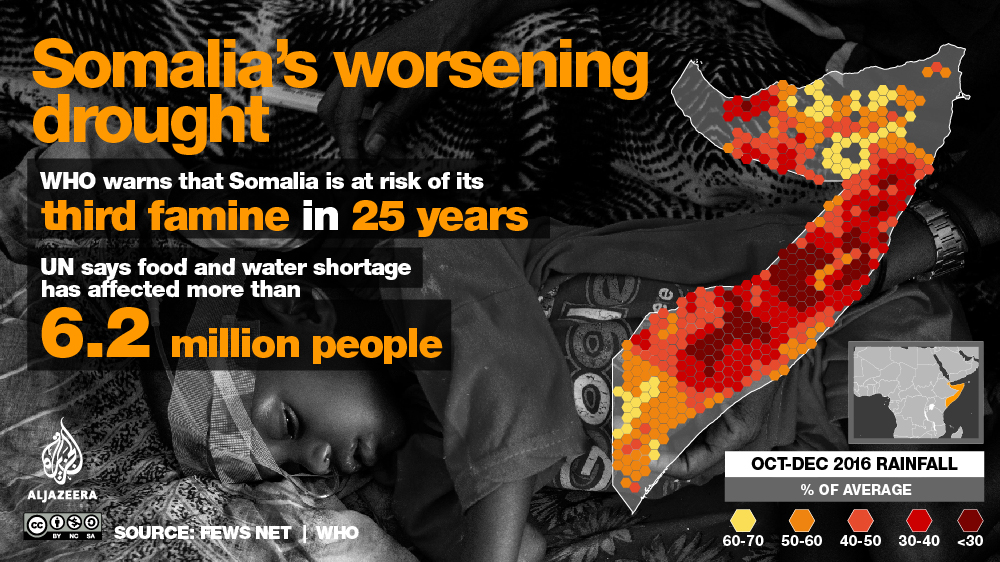 Baidoa now hosts one of the largest populations of displaced people, with more than 142,000 recorded as of mid-May, according to the International Organization for Migration (IOM).

The majority of those displaced in Baidoa are children and teens.

“Every single person we have seen is a personal story of tremendous suffering. There is no way to describe it,” Antonio Guterres, the UN secretary general, said during a visit in March to Baidoa, where he saw skeletal men, women and children in a cholera ward.

The disease has been a problem with the shortage of clean water.

Drought-stricken families often have to move from one place to another to reach aid agencies that cannot distribute food in areas under the control of al-Shabab, Somalia’s homegrown armed group which is affiliated to al-Qaeda.