Up to 80 civilians were reportedly killed late last month in an air raid on an ISIL-held neighbourhood outside the Iraqi city of Mosul, the United Nations said on Thursday.

The UN human rights office (OHCHR) said in a statement it was seeking further information on the May 31 strike on the Zinjili district, which killed between 50 and 80 people.

A US-backed military offensive to retake ISIL’s last three remaining enclaves, including Zinjili, outside Mosul’s Old City began nearly two weeks ago – the latest push in a major operation that began in October.

Several reports in recent weeks, including Pentagon investigations, have found that civilians have repeatedly been killed by air raids from a US-led coalition supporting Iraqi troops. The Iraqi air force has also been bombing ISIL targets.

Zeid bin Ra’ad al-Hussein, the UN high commissioner for human rights, urged the coalition “to ensure that their operations comply fully with international humanitarian law and that all possible measures are taken to avoid the loss of civilian lives”.

OHCHR also said there had been a “significant escalation” of civilian deaths by ISIL, whose fighters have targeted those trying to flee Mosul.

“Credible reports indicate that more than 231 civilians attempting to flee western Mosul have been killed since 26 May, including 204 over three days last week,” the agency said, reporting a much higher figure than what it had said earlier this week.

“Shooting children as they try to run to safety with their families – there are no words of condemnation strong enough for such despicable acts,” al-Hussein said.

“I call on the Iraqi authorities to ensure that those who are responsible for these horrors are held accountable and brought to justice in line with international human rights laws and standards. The victims of such terrible crimes must not be forgotten.”

Aid groups have repeatedly expressed their concerns over the safety of hundreds of thousands of civilians at risk of being caught in the crossfire.

On Monday, UNICEF warned that 100,000 children were still in ISIL-held areas, living under extremely dangerous conditions.

Almost 10,000 people fled from Mosul’s northwest and the Old City every day last week, according to UN estimates.

Mosul resident Riyadh Abdullah told the Associated Press that he and his family, along with about 200 neighbours, decided to leave their homes last Thursday after days of heavy shelling.

THE STREAM: Ramadan in Iraq

As they they neared a hospital, gunmen fired down on them, shooting Abdullah in the leg and hitting several others. Iraqi troops nearby then opened fire at the snipers.

“There were bullets falling on us like rain,” he said from a hospital bed in Erbil, east of Mosul.

“For two days there were kids bleeding, no food, no water, under the sun. So the majority died. Nobody came to us. We were shouting but no one came,” Abdullah added.

“The people saw this intensive shelling, this destruction, and so they all left their homes. And that’s what caused the massacre,” he said.

Iraqi forces launched a major operation to retake Mosul in October last year, fighting their way to the city and retaking its eastern side before setting their sights on its smaller but more densely populated west.

The eastern half of Mosul was recaptured in January and the push for the city’s western section, separated from the east by the Tigris River, began the following month. 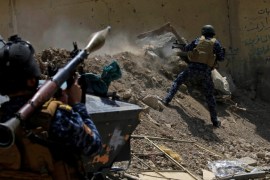 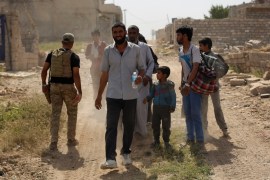 UN report says 434,775 people have fled ISIL’s last stronghold about two months into the army’s offensive to retake it.