At least five farmers were shot dead and four others injured at a protest in the central Indian state of Madhya Pradesh on Tuesday, according to local media reports.

The spokesperson of a farming union said police had fired on the protesters in Mandasur city, marking an escalation of violence as a rural strike demanding debt relief spread.

“Police started firing to disperse the crowd. Farmers were not carrying weapons,” Gajendra Tokas of the National Farm Workers’ Union, which has called for a state-wide strike on Wednesday, told Reuters news agency.

However, the state’s home minister, Bhupendra Singh, denied the allegations by the farming union, claiming that bullets were shot by “anti-social elements”.

Singh has ordered an investigation into the deaths.

“We have asked for details – how the firing started, how many people were killed,” he told CNN News 18.

“The Congress party has conspired to make this a violent agitation.The Mandasur incident is sad and unfortunate,” he said in a tweet.

Internet services have been suspended in cities of Indore, Ujjain and Dewas, which have witnessed anger by the farmers, NDTV reported.

Last week, farmers began a strike in the western state of Maharashtra, dumping vegetables and milk on the road to demand billions of dollars in debt relief and better prices for their produce.

They also want loans to be waived in the states of Maharashtra and Uttar Pradesh, which are governed by the ruling Bharatiya Janata Party (BJP). In many parts of Madhya Pradesh, demonstrations have turned violent with shops being vandalised and stones pelted at police.

“The farmers have become violent over the past two days,” a police officer told Reuters on condition of anonymity.

Fresh produce prices have more than doubled in cities such as Mumbai, forcing authorities to provide police protection for vehicles carrying milk and vegetables.

Two-thirds of India’s 1.3 billion population depend on farming for their livelihood, but the sector accounts for just 14 percent of the country’s GDP.

Some farm leaders have called off their action after the states’ chief minister said they would consider their demands, but others have stepped up efforts to block roads and damage public transport.

Madhya Pradesh is one of  several states that have suffered dismal rains and crop failures in recent years.

More than 1,600 farmers killed themselves in the state in 2016, according to official figures, mostly due to crop failure or debt. 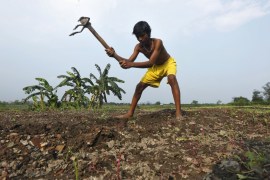 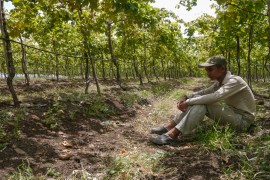