Just days before Britain’s general election, opposition leader Jeremy Corbyn has called on Prime Minister Theresa May to resign for cutting the number of police officers during her time as home secretary.

Speaking to ITV News on Monday, the leader of the Labour Party said May was directly responsible for reducing the number of police officers by about 20,000 between 2010 and 2016 before becoming prime minister.

“There’s been calls made by very responsible people on this, who are very worried that she was at the Home Office for all this time, presided over these cuts in police numbers, and now saying that we have a problem,” said Corbyn, who is pledging to recruit an extra 10,000 new officers.

“Yes we do have a problem, we should have never cut the police numbers,” he added.

Britons will cast ballots on Thursday, with opinion polls showing May’s ruling Conservatives ahead of Labour between one and 10 percentage points.

Corbyn’s comments come in the wake of two attacks during the campaigning period in the northern city of Manchester and in the capital, London, which have left 29 people dead and scores wounded.

In the aftermath of the Manchester attack, the army was deployed to the streets due to a shortage of armed police.

Responding to criticism in 2015, May said police officials were “crying wolf”.

“Today you’ve said neighbourhood police officers are an endangered species,” she told a meeting of the police federation, which represents officers.

“I have to tell you that this kind of scaremongering does nobody any good,” May added.

The Conservatives have hit back at Corbyn over his record of blocking anti-terrorism legislation as a Labour MP, some of which May herself also voted against.

“I am shocked that (Corbyn) boasted that he had opposed every piece of anti-terror legislation in his 30 years in office,” said current Home Secretary Amber Rudd, during a leaders’ debate, in which she stood in for May.

The attacks in Manchester and London have pushed security higher up the agenda than they were when the campaign for the election started.

In a speech after the Manchester bombing, Corbyn blamed British foreign intervention in Iraq and Libya for creating the conditions for organisations like the Islamic State of Iraq and the Levant (ISIL, also known as ISIS) group to thrive. 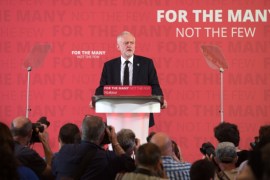 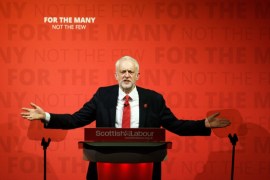