The Islamic State of Iraq and the Levant (ISIL, also known as ISIS) group has claimed responsibility for Saturday night’s attack in London in which three armed men ran over pedestrians on London Bridge and stabbed several more before being killed.

The ISIL-linked  Aamaq agency said late on Sunday that the group’s fighters were responsible for the assault that killed at least seven people.

“A detachment of fighters from Islamic State carried out London attacks yesterday,” it said.

This was the third attack in Britain that ISIL has claimed, after the bombing in Manchester and a similar attack in the heart of London in March.

ISIL makes such claims when it sends in attackers, and also when others carrying out deadly plots are inspired by the group’s ideology.

In another development, social media companies Google, Twitter and Facebook have rejected a statement by Theresa May, UK prime minister, that internet companies are partially to blame for giving “extremist views” the “safe space it needs to breed”.

May said on Sunday the three attacks in Britain were bound by an “evil ideology” that claims Western values are incompatible with Islam and demanded action from internet firms.

Representatives for the companies issued statements saying they have been working to improve the technology to identify and remove inappropriate content.

Facebook said it wanted to make its platform a “hostile environment for terrorists”.

“Using a combination of technology and human review, we work aggressively to remove terrorist content from our platform as soon as we become aware of it – and if we become aware of an emergency involving imminent harm to someone’s safety, we notify law enforcement,” it said.

Nick Pickles, UK head of public policy at Twitter, said: “We continue to expand the use of technology as part of a systematic approach to removing this type of content.”

Google said: “We are committed to working in partnership with the government and NGOs to tackle these challenging and complex problems, and share the government’s commitment to ensuring terrorists do not have a voice online.”

London police have not said what role, if any, social media or information from the internet factored into Saturday night’s attack.

British police say they have arrested 12 people in east London over the attack in the London Bridge area.

Raids are continuing in the Barking district, and the police said they would release names of the three attackers “as soon as operationally possible”.

The city of London is convening a public vigil for those killed and wounded at 6pm on Monday at Potters Fields Parks, a statement from Mayor Sadiq Khan’s office said.

A Canadian was among the seven killed.

Of the 48 who were wounded, 21 people remain in critical condition, according to the National Health Service.

They include French, Australian and German nationals. 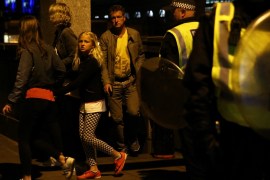 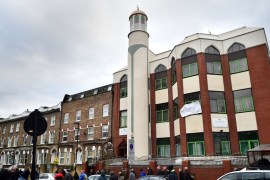 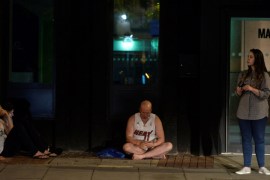 Another attack has struck the UK, this time hitting London Bridge and the nearby Borough Market area.