India’s federal police have conducted raids on offices and residences linked to founders of NDTV, the country’s oldest English-language news channel, which termed it a “witch-hunt” and an attempt to “undermine free speech”.

“NDTV and its promoters will fight tirelessly against this witch-hunt by multiple agencies. We will not succumb to these attempts to blatantly undermine democracy and free speech in India,” the broadcaster, which is seen as critical towards the government of Prime Minister Narendra Modi, said in a statement on Monday.

It dismissed the raids as “concerted harassment of NDTV and its promoters based on same old, endless false accusations”.

Prannoy Roy of NDTV being raided by IT Dept. India officially a Goonda Raj, anyone critical of govt will be crushed by official machinery.

The Central Bureau of Investigation (CBI) said it had registered a case against NDTV founders Prannoy Roy and his wife, Radhika Roy, for causing an alleged loss of 480 million rupees ($7.45m) to a bank.

A criminal case was registered against the pair while federal agents raided properties in New Delhi and Dehradun, a hill town in northern India, in relation to their investigation, said RK Gaur, spokesman for the CBI.

NDTV’s editorial director Sonia Singh said the network, which broadcasts in English and Hindi, would “not be cowed by false charges”.

“Any independent voices in media will be bullied and shut down. Black day,” tweeted Jain.

People, including journalists, came out in support of NDTV on social media – criticising the government action as an attack on media freedom.

#NDTV was trending as people on social media voiced their disapproval of the raids. Many Twitter users asked why the government was not acting against big corporations that have defaulted on loans worth billions of dollars.

But the CBI said the investigation had no link to the editorial line of NDTV, which has been targeted by right-wing groups linked to the ruling party for its perceived pro-opposition stance on a number of issues.

“We have nothing against NDTV’s news coverage … they are accused of a financial fraud and it’s our duty to investigate,” a senior CBI official said.

India slipped by three places to 136th in this year’s World Press Freedom Index compiled by Reporters Without Borders, which highlighted concerns that Hindu nationalists were “trying to purge all manifestations of anti-national thought”.

Senior officials in Prime Minister Modi’s office and members of his nationalist Bharatiya Janata Party (BJP) have told Reuters they consider NDTV to be the least government-friendly channel.

In a heated exchange last Thursday, an NDTV moderator demanded that a spokesman of the ruling BJP either apologise or leave the live debate after he accused the channel of pursuing an anti-government agenda. 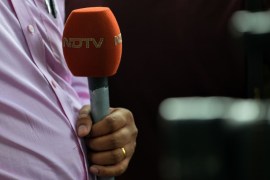 One-day ban on the Hindi language news channel was ordered as a penalty for coverage of an attack in January.