A sample count of ballots on Sunday showed Labour having a majority of more than 30,000 votes, equivalent to nearly 10 percent of the electorate.

“It is clear that the people have chosen to stay the course,” said Muscat, who called the snap vote to counter allegations of corruption against his wife and some of his political allies.

Simon Busuttil, the leader of the opposition Nationalist Party, made a telephone call to Muscat to concede defeat in Saturday’s election.

“As always, we respect the decision of the electorate,” Busuttil said in a tweet.

After the announcement of the preliminary results, Labour supporters took to the streets in celebration, gathering near party clubs and waving flags.

A crowd gathered near the party’s headquarters and workers were erecting a stage at the granaries in Floriana, Times of Malta reported.

The turnout was 92 percent of the more than 340,000 eligible voters, the election commission said. Official results are expected later on Sunday.

Muscat, 43, is expected to be sworn in on Monday, after which he will begin forming his new government that will have a five-year mandate.

During the election campaign, Muscat promised continuity and greater wealth for a country that has the lowest unemployment rate ever at 4.1 percent – the third lowest in Europe – and in 2016 registered a budget surplus for the first time in three decades.

The victory indicates that there will be no major disruption to the business of the European Union, whose presidency Malta holds until the end of this month.

Allegations of corruption dominated the election.

Shortly after polls closed, Malta’s President, Marie-Louise Coleiro Preca, called for a process of reconciliation to begin after what she called a campaign full of “aggressive and abusive language” both by politicians and the public.

“I want to see people returning to open dialogue, which is the basis of a healthy democracy,” she said.

Muscat, who has been prime minister since 2013, went to the polls a year after his wife was accused of being the beneficial owner of a secret Panamanian shell company used to bank unexplained payments from Azerbaijan‘s ruling family.

His chief of staff and a government minister have separately admitted having their own, previously undeclared Panama-registered companies, following revelations from last year’s massive data leak from the Mossack Fonseca legal firm based in the Central American country.

Muscat has come under fire for not sacking the two of them.

The PN had warned that even if Muscat won the election, he would still remain under pressure as magistrates investigate claims of corruption made against him and his ministers.

Muscat has, however, denied any wrongdoing and promised to quit if any evidence emerges of his family having an undeclared offshore account. 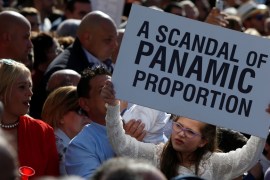 Joseph Muscat decides to hold poll a year in advance following allegation that his wife owns offshore account in Panama.