At least seven people have been killed in the UK capital after a van ploughed into pedestrians on London Bridge and attackers went on a stabbing spree in the nearby Borough Market area before being shot dead by police.

Another 48 people were also wounded in the attack late on Saturday, which occurred in a busy area with many restaurants and pubs.

“It has now been confirmed sadly that seven members of the public have died. In addition, as you know, we believe, three suspects are dead,” London Metropolitan Police chief Cressida Dick said in a televised statement on Sunday.

Two French nationals were among those injured in the London attack, the French president’s office said in a statement. Australia said two of its citizens were caught up in the attack and that one was in hospital.

The suspects were wearing what appeared to be suicide vests, but police said they were later established to be fake.

“Another witness said three men got out with long blades and randomly started stabbing people along Borough High Street. Other witnesses have also mentioned seeing knife victims,” he said.

Police said in a statement that officers “responded to reports of a vehicle in collision with pedestrians on London Bridge” and then “to reports of stabbings in Borough Market”.

Police ruled a third incident – a stabbing in London’s Vauxhall area initially thought to be linked to the other two scenes – to be unrelated.

The possible attacker was shown on the ground outside the Wheatsheaf pub in Borough Market near London Bridge.

Another man was seen lying on the ground a short distance away in the photograph.

“There is a huge police presence. Emergency services are all over the place,” said Al Jazeera’s Oliver Varney from the scene.

London Mayor Sadiq Khan described the incidents as a “deliberate and cowardly attack on innocent Londoners”.

Al Jazeera’s Charlotte Bellis was near the bridge at the time of the attack.

“Paramedics had [those injured] on their sides. It was a bloody scene,” she said.

Prime Minister Theresa May’s office said she was “in contact with officials and is being regularly updated on the incident at London Bridge”.

May’s office said she would chair a meeting of the government’s COBRA emergency committee on Sunday.

Max Abrahms, an assistant political science professor at Northeastern University, told Al Jazeera it was “clear we are dealing with a coordinated attack in two close-by locations, in very public areas”.

London’s transport authority said London Bridge railway station had been closed at the request of the police.

Three major London hospitals were placed on lockdown shortly after the attack.

“Due to the ongoing incident in central London, Guy’s, St Thomas’ & Evelina London are on lockdown to keep patients, relatives and staff safe,” the authority that runs the hospitals said on Twitter.

In March, an attacker ran people down with a vehicle on Westminster Bridge, killing four before stabbing a policeman to death outside Parliament.

World leaders quickly took to social media to offer their support to the people of London.

“Faced with this new tragedy, France is now more than ever supporting the UK. My thoughts are with the victims and their loved ones,” tweeted French President Emmanuel Macron.

Australia’s foreign minister described the incidents as a “shocking”.

US President Donald Trump also tweeted in connection with the London attacks: “We are with you. God Bless”.

He pledged support for the UK, but also used attacks to argue in favour of his controversial travel ban. 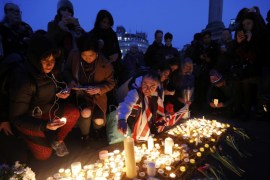 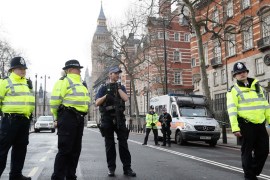