Brazilian authorities have issued arrest warrants for 95 “rotten” police officers in Rio de Janeiro state who they say have sold arms and tipped off drug gangs about future operations, in the largest such effort yet to root out corrupt officers.

At least 70 other warrants were also issued on Thursday for alleged drug traffickers and other criminals as part of the operation.

By midday, about 50 people were arrested, roughly half of them police, authorities said.

Civil police investigator Fabio Barucke told reporters that police being arrested were “rotten oranges” who would seize weapons in slums and then sell them in other slums.

“We are doing a good to society by removing these individuals from the military police,” said Barucke.

“It’s an important institution for the public safety of our state. We have extracted these rotten oranges, these bad policemen, to strengthen the safety of the state.”

In Brazil, military police patrol streets and conduct operations. They have a particularly strong presence in Rio’s hundreds of slums, or favelas.

Residents in favelas routinely complain about corruption and mistreatment at the hands of military police.

Investigators said they were targeting police who maintain ties to the powerful drug gangs that control vast swaths of metropolitan Rio de Janeiro.

Police were accused of selling powerful rifles to gang leaders and tipping them off to police actions that would be carried out in the slums the gangs control in return for bribes. 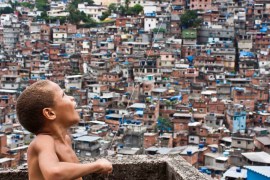 Rio de Janeiro: In the Shadow of the Hill 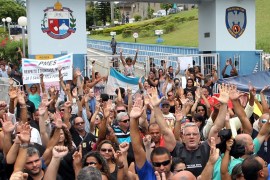 More troops and vehicles to be sent to Espirito Santo following deaths of over 100 people during week of police strike.