The UN Security Council has agreed to a major reduction of peacekeepers in Sudan’s Darfur region after US pressure led to a $600m cut in the UN budget for peace operations.

The council on Thursday unanimously adopted a resolution drafted by the UK that will cut the number of troops and police serving in the joint African Union-UN mission known as UNAMID by at least 30 percent.

Al Jazeera’s Hiba Morgan, reporting from Sudan’s capital Khartoum, said the mission would be downsized in only 11 out of 36 stations of Darfur.

“UN plans to focus more on development for about 2.7 million displaced people in Darfur as opposed to protecting peace, which they think is no longer needed,” she said.

Deployed in 2007, UNAMID has about 16,000 blue helmets on the ground who are tasked with protecting civilians in the war that Sudan’s government forces and pro-Khartoum fighters are waging against rebel groups.

The drawdown will be gradual, carried out in two phases of six months.

The smaller UNAMID will be redeployed to the region of Jebel Marra, where most of the recent violence has been reported.

The drawdown, however, could be reviewed if the Sudanese government fails to ensure protection in those areas from where the peacekeepers will withdraw.

UN Secretary-General Antonio Guterres will report to the council after six months on whether “conditions on the ground remain conducive to further reductions”.

The UN and the African Union maintain that the Darfur conflict is winding down and that the mission – among the costliest with a budget of more than $1bn – should be trimmed.

Human rights groups warn that the conflict is far from over and that the withdrawal of UN peacekeepers will leave many areas of the vast Darfur region without international witnesses.

“Nevertheless, we cannot shy away from the fact that the situation has evolved and it is right that UNAMID is adapted to reflect the current reality,” Wilson told the council after the vote.

“We will not be taking our eyes off Darfur,” he added.

The General Assembly is scheduled to vote on Friday on the new peacekeeping budget of $7.3bn, down from the current $7.87bn. 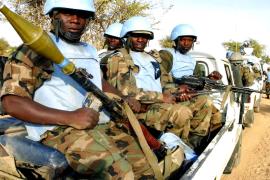 The United Nations’ largest peacekeeping operation is facing major cuts ten years after it was created.