Three Chicago police officers have been indicted on charges that they conspired to cover up and lie about what happened when a white police officer shot a black teenager 16 times nearly three years ago.

The indictment handed down on Tuesday alleges that one current and two former officers lied about what happened when officer Jason Van Dyke shot dead 17-year-old Laquan McDonald in October 2014.

David March, Joseph Walsh and Thomas Gaffney are charged with felony counts of obstruction of justice, official misconduct and conspiracy. If convicted, they could face years in prison.

The officers’ version of events contradicts what can be seen on police dash-cam video, in which the teenager spins after he was shot and falls to the ground – seemingly incapacitated – as the officer continues to fire shots into his body.

The officers said McDonald, who was carrying a knife, lunged at them.

The indictment further alleges that the officers lied when they said McDonald ignored Van Dyke’s verbal commands and that one of the officers signed off on a report that claimed the other two officers were, in fact, victims of an attack by McDonald.

“The co-conspirators created police reports in the critical early hours and days following the killing of Laquan McDonald that contained important false information,” the indictment said.

The indictments mark the latest chapter in what has been one of the most troubling events in the history of a police force dogged by allegations of racism and police brutality.

The city’s Mayor Rahm Emanuel had fought to keep the video of the shooting sealed, but a court ordered its release in November 2015.

3 Chicago cops were indicted on conspiracy charges in relation to the cover-up of Laquan McDonald's murder. A recap: https://t.co/OJBzofLowb

Special prosecutor Patricia Holms said in a statement that the three officers “coordinated their activities to protect each other and other members of the Chicago Police Department,” including filing false police reports, ignoring contrary evidence and not attempting to interview keys witnesses.

“The indictment makes clear that these defendants did more than merely obey an unofficial ‘code of silence’,” she said. “It alleges that they lied about what occurred to prevent independent criminal investigators from learning the truth.”

Jeffrey Neslund, an attorney who helped negotiate a $5 million settlement with the city on behalf of the McDonald family, welcomed the indictments.

“This is the same thing that our investigation showed back when we were negotiating with the city in 2015, that there was a cover-up,” he said.

Van Dyke was charged with first-degree murder more than a year after the shooting. He has pleaded not guilty.

His lawyer, Dan Herbert, released a fiery statement late Tuesday, alleging the indictment will silence potential witnesses and is “further proof that the government is determined to prevent” Van Dyke from having a fair trial.

In January, the Department of Justice issued a scathing report that found that the Chicago Police Department had violated the constitutional rights of residents for years, including by too often using excessive force and killing suspects who posed no threat.

Around the country, there are renewed questions about whether the legal system is willing to punish officers involved in deadly shootings.

According to The Guardian newspaper’s The Counted database, at least 1,092 people were killed by police in the United States last year.

According to a watchdog group The Sentencing Project, African American men are six times more likely to be jailed than white men.

Last week, protests erupted in Minnesota after a jury acquitted a police officer who shot and killed Philando Castile during a traffic stop. Castile’s death gripped the US after his girlfriend streamed the shooting on Facebook Live.

On Friday, a mistrial was declared for the second time in the Ohio case of a white police who shot and killed an unarmed black man during a routine traffic stop in July 2015.

Separately on Friday, a grand jury in Oregon declined to indict a police officer who killed a 24-year-old man, who was allegedly armed with a knife.

The jury found that the officer involved used a “lawful exercise of self-defence”. 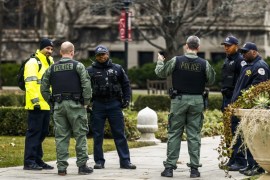 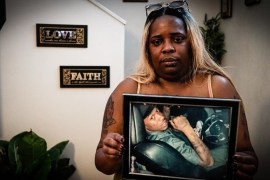 Will killings by police rise in Trump’s America?

Sandra Harris speaks out about the police killing of her 22-year-old son in February 2016.