The US also added its voice on Tuesday urging China to give Liu and his wife, Liu Xia, freedom to move and choose his own doctors.

A brief video has emerged of Liu Xia tearfully telling a friend that no treatment – surgery, radiation or chemotherapy – would work for her husband at this point.

The news has shocked and angered supporters and human rights campaigners, who questioned if the democracy advocate had received adequate care or whether the Chinese government had deliberately allowed him to wither in prison.

Liu was jailed for 11 years in 2009 for “inciting subversion of state power” after he helped write a petition known as “Charter 08” calling for sweeping political reforms.

China has criticised calls for Liu’s release as “irresponsible” and interference in its internal affairs.

Hundreds of Chinese lawyers, activists and friends have signed a petition calling on authorities to give Liu “complete freedom” and allow his wife to “have contact with the outside world”.

They also called on authorities to carry out a “thorough investigation” into the circumstances that led to the deterioration of his health.

Prison officials said Liu is being treated by “eight renowned Chinese oncologists” at a hospital in the northeastern city of Shenyang. Friends of the couple told AFP news agency that Liu Xia has been allowed to visit him there.

In Hong Kong, about 70 supporters of Liu took to the streets to demand his immediate release on Tuesday, chanting slogans denouncing the Chinese government as a “murderer”.

Human rights campaigners also demanded to know whether Liu received any medical treatment while he was in jail and why he was not given parole earlier.

“It’s very difficult to understand why his illness is only being treated at the last stage,” said Amnesty International’s Patrick Poon.

Human Rights Watch’s Sophie Richardson, citing two other cases of critics who died in detention, said the government “needs to be held to account for permitting yet another peaceful critic to fall gravely ill while unjustly detained”.

She said China had a history of allowing “peaceful critics to become gravely ill and sometimes die in detention”.

Among them is Tibetan monk Tenzin Delek Rinpoche, who was 13 years into a life sentence for “terrorism” and separatism when he died in prison in July 2015.

Cao Shunli, a Chinese dissident, died in custody in March 2014 after allegedly being denied medical treatment for months.

Other activists said Liu’s medical parole was not a humanitarian gesture, but rather a cynical attempt by authorities to avoid a backlash for allowing such a well-known rights defender to die behind bars.

Chen Guangcheng, a human rights lawyer who fled to the United States in 2012, said: “If Liu died in prison this would arouse the anger of the people and accelerate the demise of the CCP (Chinese Communist Party).” 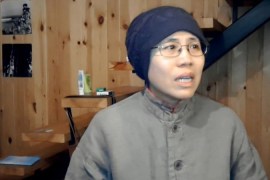 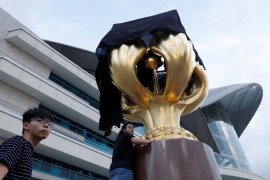 Protesters drape black flag over a symbolic statue days before visit by Xi Jinping marking 20 years since the handover.