A Dutch appeals court has confirmed that the Netherlands was partly liable for the deaths of about 300 Muslims who were expelled from a Dutch UN base after the surrounding area was overrun by Bosnian Serb troops.

The ruling by The Hague Appeals Court upholds a 2014 decision that Dutch peacekeepers could have known that the men seeking refuge at the base in the village of Potocari would be murdered by Bosnian Serb troops if forced to leave – as they were.

The Muslims seeking shelter were among about 8,000 people killed in the July 1995 massacre, which the UN International Court of Justice, in a 2007 verdict, ruled a genocide.

Tuesday’s ruling is seen as exceptional as the United Nations enjoys immunity from prosecution.

The Dutch case is almost unique in holding a state participating in a UN peacekeeping mission liable for its actions.

However, the ruling met  “dismay” from several mothers of the victims who were representing more than 6,000 Srebrenica relatives who filed the case against Netherlands, according to Al Jazeera’s Jonah Hull, reporting from The Hague.

The court rejected their case, which argued the Dutch government should be held responsible for the protection of thousands more Muslims who had gathered outside the base.

“They were clearly upset. There were audible gasps in court, faces clasped in hands as the judgement was read out and it became apparent to them that the judgement in this appeal wasn’t going their way,” he said.

Munira Subasic of the “Mothers of Srebrenica” group said: “This is a great injustice. The Dutch state should take its responsibility for our victims because they could have kept them all safe on the Dutchbat (Dutch battalions’) compound.”

Many of the Muslim victims had fled to the UN-declared “safe zone” in Srebrenica only to find the outnumbered and lightly armed Dutch troops there unable to defend them. They then headed to the nearby Dutch base.

Reading the complex ruling, Presiding Judge Gepke Dulek-Schermers said that Dutch soldiers “knew or should have known that the men were not only being screened … but were in real danger of being subjected to torture or execution”.

The ruling relates only to the 300 men who had sought safety on the Dutch-controlled base.

In a departure from the earlier ruling, it said the Netherlands should pay only 30 percent of damages, as it estimated the odds at 70 percent that the victims would have been dragged from the base and killed regardless of what the Dutch soldiers did.

The amount of damages is determined in a separate procedure unless the victims and the state can reach a settlement.

READ MORE: Srebrenica lives on in the suffering of others

Al Jazeera’s Tony Birtle, who reported extensively from Srebrenica during the war in Bosnia, said the case was “a sad indictment of the entire international community, especially Europe, because Srebrenica was a culmination of three years of terrible things happening from ethnic cleansing, the rape, the torture.”

“This was all happening under the noses of the European Union, for example. Nothing was done,” he said. “It is probably going to affect how the UN approaches things in the future.”

Dutch state lawyers left the court building on Tuesday without commenting on the ruling.

The Dutch government resigned in 2002 after acknowledging its failure to protect the refugees, though the Netherlands maintains that the Bosnian Serbs, not Dutch troops, bear responsibility for the killings.

Ratko Mladic, former Bosnian Serb military commander, is on trial for genocide with a verdict expected later this year. 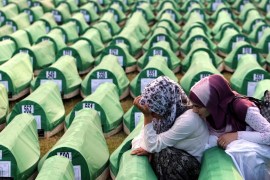 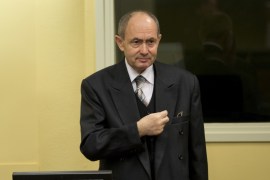 Zdravko Tolimir, convicted by UN judges of genocide in the 1995 Srebrenica massacre, died in The Hague. 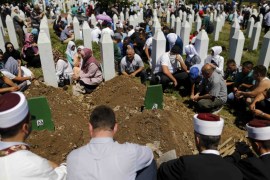