In a filing with the Supreme Court, Prosecutor General Rodrigo Janot accused Temer of receiving a 500,000-real (about $150,000) bribe from the boss of a meatpacking company implicated in a corruption scandal.

However, for Temer to go on trial, the lower house of congress must first approve Janot’s charge by a two-thirds majority. Temer would then be suspended for six months for the trial.

Janot is also separately probing Temer for alleged obstruction of justice and membership of a criminal group. He is expected to file those charges at a later date.

Temer denies all wrongdoing. Earlier on Monday, in his first comments since arriving back from a trip to Russia and Norway, Temer said that he had no intention to step down.

“There is no plan B,” he said at a ceremony to sign a new bill in the capital Brasilia. “Nothing will destroy us — not me and not our ministers,” he said.

Unpopular and under fire

Al Jazeera’s Rafael Pieroni, reporting from Sao Paulo, says Temer is “one of the most unpopular presidents in recent history here in Brazil”.

“The expectation is that further [charges] will be brought in the next few days.”

Temer’s latest approval ratings are just seven percent, lower than his deeply unpopular leftist predecessor Dilma Rousseff whom he replaced last year after she was impeached by his centre-right congressional allies for breaking budgetary rules.

Temer took over, promising to restore political stability and to steer Brazil out of its deepest recession in history with market reforms. The political capital he needs for those reforms, including the hugely unpopular proposal to cut back generous pensions and to free up labour laws, is rapidly slipping away.

Temer so far is believed to have enough support in the lower house of congress to defeat Janot’s criminal charges and avoid trial.

Janot, however, is piling on the pressure and by separating the charges he would make sure that the crisis drags on, weakening Temer’s political base and making two-thirds congressional approval for his trial more likely.

The bribery charge is linked to the arrest of a close former presidential aide with a suitcase stuffed with cash that prosecutors say was part of payments from JBS meatpacking executives to Temer.

Equally explosive is the allegation that Temer approved a plan with Joesley Batista, owner of JBS parent company J&F, to pay hush money to a politician jailed for corruption.

Batista secretly recorded Temer in an allegedly compromising discussion and gave the recording to prosecutors in a plea bargain to secure leniency in his own corruption case. Temer claims the secretly recorded audio was “manipulated and doctored”.

In a further sign of Temer’s weakening position, an important figure in his ruling coalition, former president Fernando Henrique Cardoso, called earlier on Monday for him to step down and help Brazil hold new elections.

‘The system is very powerful’

Luis Carrijo, a federal police union adviser, told Al Jazeera he fears that even convicting the president would not be enough to tackle alleged corruption.

“Our endemic, systemic corruption has suffered a blow, but the system is very powerful and will find a way to counter prosecution – like they did in Italy when corrupt lawmakers simply legalised what was illegal,” he said.

“The problem goes back to the founding fathers of Brazil’s young democracy, who passed laws so flexible that they served their own interests – often before those of the country. And so Brazilians are understandably sceptical about expecting congress to reform a political system that has served its members so well for so long,” she said.

“It’s too soon to foresee if President Temer can survive the corruption charges against him. If not, the real issue will be whether whoever follows will be any different,” added Newman. 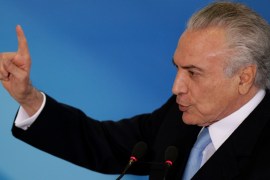 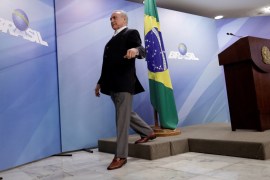