Syrian President Bashar al-Assad may be preparing a chemical weapons attack that would result in the “mass murder” of civilians, the White House. It warned Syria’s government that it would pay a “heavy price” if it goes ahead.

The White House on Monday said US intelligence observed potential preparations similar to those in the run-up to a deadly chemical attack on the opposition-held town of Khan Sheikhoun in April that the US blamed on Assad’s forces.

On Tuesday, Ali Haidar, a senior Syrian minister, denied the latest allegation, saying the US is only trying to lay the groundwork for a “diplomatic battle” against his country before the United Nations.

Russia is Assad’s key backer and sided with him when he denied responsibility for a chemical weapons attack that killed dozens of people in Idlib province on April 4.

More than 70 people were killed in that attack, including many children. The US launched missile strikes against a Syrian airbase in response to that incident.

“The United States has identified potential preparations for another chemical weapons attack by the Assad regime that would likely result in the mass murder of civilians, including innocent children,” Sean Spicer, White House spokesperson, said in a statement.

“The activities are similar to preparations the regime made before its April 4, 2017 chemical weapons attack.”

On Tuesday, the US defense department said it saw what appeared to be active Syrian preparations for an attack.

“This involved specific aircraft in a specific hangar, both of which we know to be associated with chemical weapons use,” Pentagon spokesman Captain Jeff Davis told Reuters news agency.

Assad has strongly denied the allegation that his forces used chemical weapons in Khan Sheikhoun, describing it as a “100 percent fabrication”.

Al Jazeera’s Natasha Ghoneim, reporting from Gaziantep, said the White House’s public warning took some military leaders in the US by surprise.

“Analysts have said that it is not common for [the White House] to make a public warning like this instead of through diplomatic channels,” she said.

For their part, Syrian activists are asking why the US is merely issuing a warning instead of acting if they really believe a chemical attack is imminent, she said.

Assad has said repeatedly that his forces turned over all chemical weapons stockpiles in 2013, under a deal brokered by Russia to avoid threatened US military action.

The agreement was later enshrined in a UN Security Council resolution.

However, Jim Mattis, the US defense secretary, has previously said that there is “no doubt” that Syria has in fact retained some chemical weapons.

Human Rights Watch, the US rights organisation, said in May that Syrian forces used nerve gas in four attacks since December – part of a “clear pattern” that could amount to war crimes.

“If, however, Mr Assad conducts another mass murder attack using chemical weapons, he and his military will pay a heavy price.”

Against this backdrop of escalating tensions, the Syrian Observatory for Human Rights (SOHR) said 57 people were killed on Tuesday in eastern Syria by US-led coalition strikes.

The SOHR said the air strike took place on Monday at dawn, hitting a building in the town of al-Mayadeen that was used by ISIL as a prison.

A spokesman for the US-led coalition said it would quickly look into the matter.

The US-led coalition and allied fighters are battling to dislodge ISIL, also known as ISIS, from its Syrian stronghold of Raqqa.

The coalition is also backing a major assault on the last ISIL-held pockets of Mosul in neighbouring Iraq.

Russia is flying a bombing campaign in Syria in support of Assad, while the US is heading a coalition mainly targeting ISIL.

Neither the US, which backs the opposition, nor Russia, a longtime ally of the Syrian government, has managed to find a solution to the conflict.

Syria’s war began in March 2011 with anti-government protests that escalated into a complex conflict that has killed more than 320,000 people and displaced millions.

Opposition groups are now on the back foot after Assad government’s advances with support from Russia and Iran. 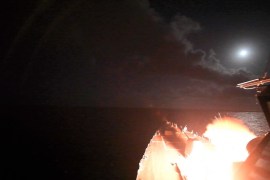