A forest fire in southern Spain threatening a national park famous for its biodiversity has forced the evacuation of at least 1,500 people, according to local authorities.

The flames advanced eastward on Sunday and entered Donana National Park, one of Spain’s most important nature reserves, a tourist attraction and a UNESCO World Heritage site since 1994.

The park, which has over 50,000 hectares of wetlands and woods, is an important stop for migratory birds from Africa and Europe. It is home to a variety of animals, including the highly endangered Iberian lynx and the Iberian imperial eagle.

“The fire has entered in the limits of the reserve, and that is where we are focusing our efforts,” Jose Gregorio Fiscal Lopez from the regional Andalusian authority in charge of the environment told Spanish national television.

Emergency services said local authorities sent in 10 helicopters, seven planes and four waterbombing jets to deal with the blaze, which comes a week after forest fires killed more than 60 people in neighbouring Portugal. Over 150 firefighters were also combating the blaze.

Spain was notably hit by a spate of forest fires in 2015 and officials said some of those could had been started deliberately.

The cause of the latest fire was also not clear and regional president Susana Diaz, who rushed to the area affected, indicated “the human factor cannot be excluded.”

Diaz said fighting the blaze was proving difficult due to the hot, dry weather, with temperatures reaching 39 degrees Celsius and shifting winds.

The regional president said “there’s no risk to the population” after hundreds of people were evacuated from campsites and houses near the town of Moguer on Spain’s southern coast where the fire started on Saturday night.

Around 750 people are being housed temporarily in sports centres, according to emergency services. Some residents had already been allowed to return to their properties.

At this time of year, Spain is also having to battle drought and on Sunday saw several areas classed as being at maximum risk of fire, including the Andalusian province of Huelva, where the Donana Park is situated. 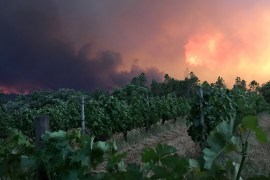 Death toll climbs to 62 as firefighters battle to contain at least 60 blazes that originated in Pedrogao Grande area.