Fighting has resumed in the Philippine city of Marawi as a ceasefire, declared by the military to allow Muslims to mark the end of the holy month of Ramadan, ended.

The military said it would halt its offensive against fighters linked to the Islamic State of Iraq and the Levant (ISIL, known as ISIS) group for eight hours on Sunday.

No gunfire or air raids were heard over the city, 800km south of the capital, Manila, as the “humanitarian pause” took effect from 6am local time on Sunday, but gunfire erupted as soon as the ceasefire ended at about 2pm local time, AFP reporters in Marawi said.

“There was no deployment of military assets as security forces maintained an active distance [during the ceasefire].”

The ceasefire was imposed “as a gesture of our strong commitment and respect to the Muslim world particularly to the local Muslims of Marawi City”, said Padilla.

In May, Philippine President Rodrigo Duterte declared martial law across all of Mindanao to quell what he described as an uprising aimed at establishing an ISIL caliphate in the area.

Australia has sent two hi-tech surveillance planes to help Philippine troops in Marawi, joining the US in providing military assistance.

The battle in Marawi began on May 23 when hundreds of Maute fighters laid siege to the municipality after government forces tried to arrest a local leader of ISIL.

The fighters had planned the attack months ahead, and actually intended to burn down Marawi and set up an ISIL stronghold in the southern region of Mindanao, the military said.

Fighting in the region has left more than 380 people dead and displaced over 300,000 residents, the government said.

The government claimed those killed included 268 fighters, eight of whom were foreign fighters from Malaysia, Indonesia, Yemen, Saudi Arabia and Chechnya in Russia.

The seizure of Marawi by the Maute group and its affiliates has caused the biggest internal security crisis in decades for the Philippines.

Images of black-clad fighters and ISIL flags flying in Marawi has caused alarm in the mainly Roman Catholic nation, and the protracted occupation and presence of foreign fighters suggests the the fighters may have bigger designs on the southern Philippines than previously imagined.

On Saturday, gunfire rang out across the lakeside town as aircraft dropped a succession of bombs, setting buildings ablaze and sending bursts of debris and smoke into the sky behind mosque minarets and charred buildings.

A military official said on Saturday more than 100 Christians could be hostages, including a priest, according to information provided by eight residents who escaped their captors during a Friday air raid.

Conditions for those trapped in Marawi have been dire, with witnesses reporting bodies on streets, food and water in short supply, and a constant threat of being killed by either the fighters or bombs dropped by government aircraft. 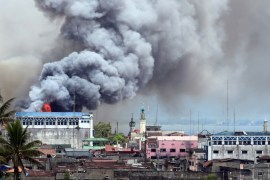 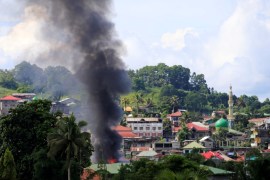