Albania’s ruling Socialist Party look set to win Sunday’s parliamentary election with between 45 and 49 percent of votes, an exit poll by Italy’s IPR Marketing showed, which could secure them a majority of the seats in parliament.

The opposition Democratic Party is projected to win up to 34 percent of the vote.

“The Socialist Party might have won more than 71 seats (in the 140-seat parliament), but this is still an opinion not a certainty,” IPR Marketing’s Antonio Noto said.

The two biggest parties are seeking a majority in a parliamentary election that follows a landmark agreement between the country’s two biggest political parties to back efforts to secure European Union membership.

Neither party won an outright majority in the 140-seat parliament in the 2013 or 2009 elections.

Voters of all ages were seen lining up early when polling stations opened in the capital, Tirana, starting at 05:00 GMT. Turnout as of 12:00 GMT was 27.28 percent.

As of 1700 GMT, Al Jazeera has learned that voting has been extended for another hour because of the low turnout.

Before polls opened, thousands of Muslims, who make up 60 percent of the population, recited prayers in the newly-built pedestrian square in central Tirana to mark the end of Ramadan.

Since communism collapsed in the early 1990s, Albanian elections have been marred by fraud, violence, disputed results and bitter rivalries bordering on hatred.

There are an estimated 3,000 independent election monitors deployed across the country of 2.9 million people to make sure the votes are properly counted, our correspondent said.

“That goes a long way towards reassuring Albanians that they are having a free and fair election,” he said.

Luan Rama, of the Socialist Party for Motivation, the third main political party, said one member was injured following a quarrel and a shooting incident outside a polling station in Shengjin, 60km northwest of Tirana.

Police investigating the incident said they found a cartridge but no injured person was taken to the hospital. They said it did not disrupt the voting.

Earlier on Sunday, the interior ministry also reported hundreds of attempts to buy votes, a crime that may result in a jail term.

Holding a free and fair election is key to launching European Union membership talks for the nation of 2.9 million, which is already a NATO member.

After earning EU candidate status in 2014, Tirana has struggled to pass important reforms vital for its bid to advance to EU – namely deeply reforming its corrupted justice system.

“I came to vote for Edi Rama because I see his hand in every corner of the country,” a supporter of the prime minister told Al Jazeera in Tirana. “The most important thing he’s trying to establish is the rule of law.”

“We expect a better Albania and leaders to work to do what they have pledged at the campaign,” voter Zenel Caka, 47, told the Associated Press news agency in Tirana.

Erion Veliaj, the mayor of Tirana and a staunch Rama ally, told Al Jazeera that the government’s key battle is to clear out corrupt judges.

“The country has been held hostage for a long time by a clique of about 300 judges who check and balance themselves and have zero control from the general public,” he said.

Opinion polls give Rama’s party the edge over Basha’s, but it is not clear whether the prime minister would garner enough support to win an outright majority.

Basha, an ardent admirer of US President Donald Trump, has accused Rama of links to organised crime and turning the Balkan state into a “drugstore”, referring to Albania’s cannabis trade.

The prime miniser rejects the accusations, telling a rally this week that he needs a strong mandate “to do four times more than we did in 44 months”.

The Democrats had threatened to boycott the election until a month ago over fears the vote would be unfair, but they struck a deal giving them key ministerial posts in the run-up.

While national statistics showed the economy grew 3.46 percent last year, up from 1.0 percent in 2013, Albanians said they were yet to feel the benefit.

Unemployed mother Shqipe Berberi, who lives in the western city of Kavaje, said she could not afford to feed her children properly.

“Those who have been in power did nothing,” the 43-year-old told the AFP news agency.

Albania remains one of the poorest countries in Europe and its unemployment rate affecting nearly one in three young people has spurred the highest emigration levels in the world.

Since taking office, the Socialists have managed to improve tax collection and boost the performance of the electricity sector. 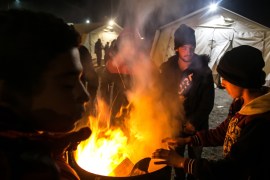 Is Albania the next stop for stranded refugees?

A country with its own recent history of migration could soon find itself at the centre of Europe’s refugee crisis. 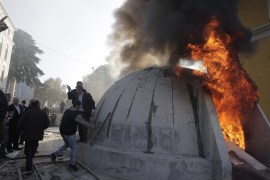 Opposition members in Tirana arrested for taking part in one of the country’s largest anti-government rallies in years.