Russia’s electoral body has announced that Alexei Navalny, the opposition leader, is barred from challenging President Vladimir Putin in next year’s elections.

In a statement released on Friday, the Central Electoral Commission said Navalny is “not eligible to stand for office” because he is currently serving a five-year suspended sentence for embezzlement.

The body said people convicted of such crimes cannot stand for public office until 10 years after their sentence ends.

“According to the constitution, any citizen who is not in prison is eligible to stand for public office,” he said.

Navalny ran in the 2013 Moscow local elections, coming second against a Kremlin-backed incumbent with a Western-style campaign and a message of snuffing out corruption.

Navalny was allowed to compete in that race as he was appealing his first 2013 conviction.

The European Court of Human Rights last year quashed the verdict, saying Navalny and his former business partner did not have a fair trial.

Navalny and his supporters condemned the trial as politically motivated.

The Russian court held a retrial this year, issuing the same sentence. A regional court later upheld the sentence.

Putin is expected to stand for a fourth Kremlin term in the March 2018 election, but has yet to confirm this.

The nomination of candidates will begin this December.

The opposition is already opening campaign offices across the country to register supporters for its presidential bid.

A presidential candidate is required to obtain 300,000 signatures of support in the space of 40 days later this year in order to enter the race.

Navalny’s campaign has been marked by controversy. In one incident, an attacker threw green dye at his face, causing eye damage.

The campaign’s rented office in Moscow also had its electricity switched off just days after its launch.

He is currently serving a 30-day sentence in police cells as the organiser of an unauthorised protest after he called anti-corruption demonstrations on June 12 that saw more than 1,700 people detained nationwide. 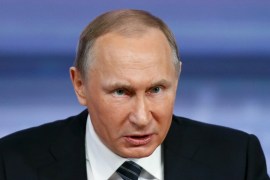