Press freedom and human rights advocates, journalists and social media users have condemned a demand by Saudi Arabia and other Arab countries to shut Al Jazeera network and other media outlets in Qatar.

The Arab states reportedly issued a 13-point list on Friday, demanding the closure of all news outlets that it funds, directly and indirectly, including Arabi21, Rassd, Al Araby Al Jadeed, Mekameleen and Middle East Eye.

“We are really worried about the implication and consequences of such requirements if they will ever be implemented,” said Alexandra El Khazen, head of Middle East and North Africa desk at Reporters Without Borders, a non-profit organisation promoting press freedom.

Speaking to Al Jazeera from Paris, Khazen said: “We are against any kind of censorship and measures that could threaten the diversity in the Arab media landscape and pluralism, for instance.

“The Arabic media landscape should make room and accept the broadest range of viewpoints instead of adopting repressive measures against alternative viewpoints that are found to be critical of some governments.”

Khazen also expressed concern over the impact of the demands on the employees of the mentioned media outlets.

“Some of them may come under pressure to resign or to choose to do so to be aligned with the policy of their country, so we are currently investigating this,” she said.

“This is just an attempted expansion of the cowardly censorship they have inflicted on their own citizens, but it will fail,” she said.

Tim Dawson, president of the UK’s National Union of Journalists, expressed his “absolute horror” in reaction to what he called a “monstrous request” and urged the Saudi government to withdraw the demands.

The Committee to Protect Journalists (CPJ) also condemned “the use of news outlets as a bargaining chip” and “urged all countries involved in this dispute to stop holding media hostage” to political differences.

“The Gulf region needs a vibrant free press and news outlets based there must be allowed to report freely,” said Joel Simon, the executive director of CPJ.

Meanwhile, The Guardian criticised the efforts to silence Al Jazeera as “wrong” and “ridiculous”.

“The attack on Al Jazeera is part of an assault on free speech to subvert the impact of old and new media in the Arab world. It should be condemned and resisted,” the UK-based newspaper said in an editorial.

“We are stunned by the demand to close Al Jazeera,” Giles Trendle, the acting managing director of Al Jazeera English, said.

“Of course there has been talk about it in the past but it is still a great shock and surprise to actually see it in writing. It’s as absurd as it would be for Germany to demand Britain close the BBC.”

READ MORE: GCC Crisis – Who is who?

“We call on all governments to respect media freedom. We hope other media organisations will support our call to defend media freedom,” he added.

Trendle said the roots of the demand to close Al Jazeera go back to 2011 and the Arab Spring.

“At that time, Al Jazeera was covering the dreams and the aspirations of a new generation of people. We provided the platform for the voice of the man and the woman in the Arab streets. We were covering those protests and we were providing a diversity of viewpoints. We were really the voice of the voiceless. I think there are some regimes in the region that don’t appreciate that diversity of views. I think that’s the reason for what’s going on here.”

“I am against demands to close any media outlet, because it is a crime, a violation of basic human rights to freedom of speech,” Abuhilalah told Sputnik.

“If Al Jazeera violated something, anyone could sue it – in a Qatari court or in [a court of] any other country, it is the legitimate right of every person harmed by the media. But the demand to close [Al Jazeera] is a crime.”

Saudi Arabia, the UAE, Bahrain and Egypt severed relations with Qatar on June 5, accusing it of supporting “terrorism”. Qatar has denied the allegation.

Qatar’s Foreign Minister Sheikh Mohammed bin Abdulrahman Al Thani has said that Al Jazeera Media Network is an “internal affair” and there will be no discussion about the fate of the Doha-based broadcaster amid the Gulf crisis.

To stem the flow of negative reactions Saudi Arabia, UAE and Bahrain took steps to curb their citizens from expressing opinions that opposed their policies.

The UAE announced that any objections to the UAE’s strict measures against the government of Qatar or expression of sympathy with Qatar would be a crime punishable by a prison sentence of 3-15 years and a fine of no less than $136,000 (500,000AED), whether on a social media platform or via any written or spoken medium.

The criminalisation of sympathy with Qatar was implemented in Saudi Arabia and Bahrain with slight differences in the length of prison sentences and size of fines.

Khazen said the decision to punish citizens is a “huge violation of freedom of speech and information that could have serious implications”.

Al Jazeera reporters have often come under fire, with Egypt imprisoning Arabic reporter Mahmoud Hussein, who has been in jail for 185 days for “disseminating false news and receiving monetary funds from foreign authorities in order to defame the state’s reputation”.

Al Jazeera’s Baher Mohamed and Mohamed Fahmy spent 437 days in jail before being released. Peter Greste spent more than a year in prison in Egypt. 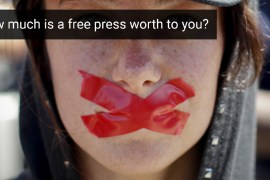 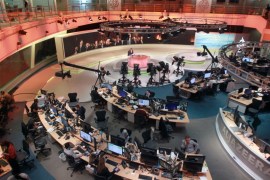 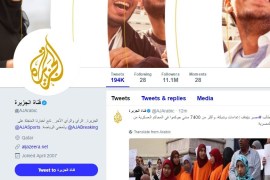 Doha-based network says brief suspension of official account appeared to be caused by an ‘organised campaign’.