The British van driver suspected of ramming Muslim worshippers near a London mosque appeared in court on Friday charged with “terrorism-related murder and attempted murder”.

Darren Osborne, 47, appeared at Westminster Magistrates Court in central London, speaking to confirm his name, age and that he had no fixed address.

The Crown Prosecution Service said it would argue that Osborne, “motivated by extreme political views and a personal hatred of Muslims, acted to kill, maim, injure and terrify as many people as possible” during this week’s attack.

He will appear at London’s Old Bailey criminal court for a preliminary hearing on Tuesday.

One man died in the incident early on Monday near Finsbury Park Mosque in north London, and another 11 people were injured.

Police initially said it was unclear if the victim, 51-year-old Makram Ali, had been killed in the incident or had died of other causes.

On Thursday, they said the preliminary findings of a post-mortem had concluded he died of multiple injuries.

READ MORE: The connection between Grenfell and Finsbury Park

Ali’s family said in a statement: “We know that he had some form of collapse because of his weak leg, a condition he suffers from, before recovering, sitting up and expressing a wish to return home only to then become a victim of this horrific incident.”

The father-of-six, who had come to Britain from Bangladesh at the age of 10, was a quiet man who regularly attended his mosque and enjoyed playing with his grandchildren, the statement said.

Four others injured in the attack remain in hospital, with two receiving critical care.

Police said the rented van involved had been driven from Cardiff to London on Sunday and have appealed for anyone who saw it to come forward.

The incident at Finsbury Park in north London was the fourth attack in Britain since March described by police as “terrorism”, and the third to involve a vehicle driven at pedestrians.

Osborne was arrested at the scene after being apprehended by the crowd.

Prince Charles visited the scene of the attack on Wednesday and delivered a message of solidarity from his mother, Queen Elizabeth II.

The heir to the throne said he was deeply impressed by Mohammed Mahmoud, the imam who shielded the suspect until police arrived, fearing a mob attack. 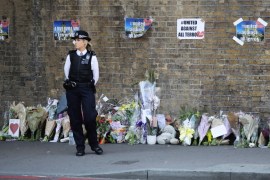 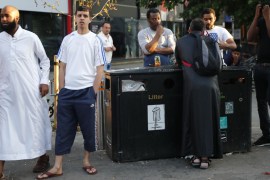