Khartoum, Sudan – She’s seen it before. The images of dry, cracked lands; dead trees; animal corpses; hungry children and lines of people waiting for food assistance are not new to her.

The current drought and resulting food crisis affecting millions across the Horn of Africa are painful reminders of the importance of her work.

But that’s not all that bothers her. Across the Atlantic, the Trump administration’s decision to withdraw from the Paris Agreement and proposed policies to reverse the United States’ contribution to the fight against climate change dishearten her. They add insult to injury.

“This is the problem with climate change: it’s caused by the large emissions of industrialised countries, so they are more responsible for the climate change phenomenon,” said Balgis Osman-Elasha, a climate change expert with the African Development Bank in Abidjan, Ivory Coast.

“We are being impacted by something we have not contributed to,” she said.

A recognised scientist on global warming from Sudan, Osman-Elasha helps promote climate change adaptation efforts in Africa, which more than any other continent has born its brunt.

This year its eastern region is witnessing a third year of consecutive drought that scientists link to climate change. The UN has issued a call to action for the Horn of Africa seeking to raise funds to address the unfolding humanitarian crisis that includes food shortages, human displacement, and refugees.

Osman-Elasha’s work has received global attention. A lead author of the UN’s Intergovernmental Panel on Climate Change reports, she was among a select few to represent the group in 2007 in Oslo to receive the Nobel Peace Prize, next to Al Gore.

The following year, she was awarded the UN’s Champions of the Earth Prize. The US State Department invited her to the United States in 2008 to take part in a science diplomacy programme, where she gave lectures on climate change at several American universities.

Her achievements were the result of years of hard work and persistence. Like women studying the sciences everywhere, she was among a small group at her university.

“There were a few female students in the faculty of agriculture, even fewer in the forestry department,” she said of her days at the University of Khartoum in the early 1980s.

Entranced by nature and trees as a child, she spent weeks as a university student camping and studying the forests of Sudan. Her research took her all over the country from one village to another, where she helped to spread awareness of the importance of forests, preserving and planting trees, and conserving energy.

After years of working on forests, she joined a local government agency that provided the UN with reports on the effects of climate change in Sudan. She helped to identify the sources of greenhouse gas emissions in the country, such as deforestation and land degradation, and recorded the signs such as increasing drought and floods.

“Sometimes there are droughts that come in the middle of the rainy season that have an impact on agriculture,” she explained.

“The rain now comes later. It’s not the usual pattern. It can now come all suddenly and in one day you can have the whole quota of the season, so there’s a shift in the timing, a change in the pattern,” Osman-Elasha told Al Jazeera.

Drought and shifting rain patterns have affected the lives of farmers and nomads, reducing fertile farms and grasslands and sometimes causing conflicts. One place that attests to this is Darfur, which former UN chief Ban Ki-moon described as the first modern conflict caused, in part, by climate change.

“There are many factors that escalated the conflict, but the triggering factor was climate change, the changing weather conditions,” Osman-Elasha said.

The same signs exist across the region of the greater Horn of Africa, where droughts have become more frequent, associated with famine, food insecurity, displacement and migration in places such as Sudan, Ethiopia, Somalia and Kenya. That’s why she thinks long-term solutions are needed.

“The problem with the Horn of Africa is that previous solutions have not targeted the real causes of the problem: trying to create an environment for sustainable development. It’s always relief and short-term solutions,” she added.

Today, Osman-Elasha helps African countries to adapt to climate change by initiating “climate-proof development”. She gives advice on how to plan development projects such as hydroelectric dams and roads while taking into account climate variables such as drought and flooding.

While she admits there are ways to go, she believes many African countries are on the right track. The global dimension of climate change and the efforts to combat it also concern her.

According to the World Resources Institute in Washington, DC, greenhouse gas emissions caused by the energy sector in industrialised nations are the major “culprit” behind global warming with China, the United States, and the European Union being the “top three greenhouse gas emitters”.

Osman-Elasha has participated in dozens of conferences to discuss global efforts to combat climate change, including recent UN conferences in Lima, Paris, and Marrakesh.

Having stayed up late in the night following efforts to convince all parties, she recalled the sense of victory that scientists and activists felt in Paris in late 2015 when governments signed the Paris Agreement.

So the Trump administration’s views and actions on climate change “disappointed” her, but were not a surprise.

“The decision in the US is heavily influenced by industrial companies, especially in the energy sector,” she said with a sigh. “It is in their interests to continue in their dirty work polluting the environment and making profits.”

Nevertheless, for Osman-Elasha, a mother of three who completed her masters and doctorate after giving birth to her children, nearly two decades of work continues to attract admiration and inspire a new generation of women in Sudan and elsewhere.

“When girls and young women see successful scientists like Dr Osman-Elasha, there is no greater illustration of how science is a career that belongs to women as much as it does to men,” said Naysan Sahba, UN environment spokesperson.

One person inspired by Osman-Elasha’s work is Ne’mat Allah Shawki, 25, a national coordinator with the Arab Youth Climate Change Movement in Khartoum.

“She has become my role model,” said Shawki, who also studied forestry at the University of Khartoum.

“Dr Balgis’ work has influenced me greatly by encouraging me to hold on this track and keep being an environmental activist,” she said.

Despite the many challenges of climate change, Omsan-Elasha remains optimistic that Trump’s stance will not prevail.

“I’m happy to know that many scientists in the US are working hard on climate change and I’m confident that they will not accept this,” she said. 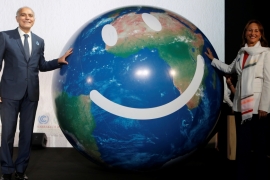